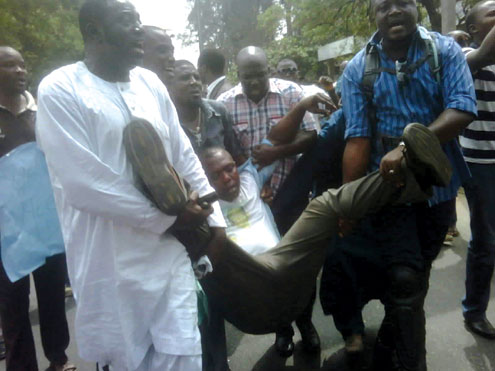 •A man teargassed by police being taken away by other protesters at Ojota, this morning. PHOTO: SIMON ATEBA.

Prominent Nigerians who led protest against the deployment of soldiers to Lagos State were dispersed with teargas fired by policemen this morning as they proceeded to the Gani Fawehinmi Park located at Ojota.

The protesters, led by 83-year old Prof Ben Nwabueze, Idika Kalu and Tunji Braithwaite of the National Action Coalition (NAC), were dispersed by the policemen, led by Tunde Sobulo at the 7Up area of Olushosun, resulting in the collapse of one of the protesters, whose identity is yet to be known as at the time of filing this report.

The attack by the policemen, who had earlier threatened them at the Lagos State House of Assembly complex, Alausa, prevented the protesters from getting to the venue of the rally.

The protester, who converged on the Lagos State House of Assembly from where they began their peaceful march to Ojota, had rejected the N97 per litre price of fuel announced by President Goodluck Jonathan, saying the action depicted Jonathan as a dictator rather than a democrat.

The protesters, who carried placards with inscriptions such as ‘We Are Not At War! Send Your Soldiers Back To The Barracks,’ ‘All We Want Is N65 Per Litre And Nothing More,’ ‘Goodluck N65, Good N65, Badluck N97, Bad N97,’ ‘Be Responsible To Those You Are Supposed To Serve,’ started their march to Ojota from the Lagos State House of Assembly.

In his speech, Braithwaite, who is the convener of the National Action Coalition, said the issue of fuel subsidy removal has not been resolved contrary to the impression given by the government.

According to him, there are bigger issues including corruption as well as issues of the constitution. He said many of the country’s allies have used this as an advantage to exploit the country.

He also condemned the deployment of soldiers to the streets of Lagos.

In his view, 83-year old Nwabueze said though the leaders of the country are scared of using the word ‘revolution’, this is the beginning of the move by the people to rid the country of corrupt elements.

“We want to curb the country of all its rottenness. Every part of the administration of the country is rotten and we cannot continue.

“But let me say what they did should not be looked at as a disappointment, but anger that should galvanise us all to action.”

He said the challenge now is to clear the country of its challenges by confronting the leaders through effective mobilisation of all sectors of the country.

He described the Nigeria Labour Congress and the Trade Union Congress as a disappointment .

Nwabueze said he had started putting out a series of five papers to call for a sovereign national conference.

According to him, the papers would soon be delivered to the National Assembly and the Presidency, who would be given a time line to organise it.

He said if they fail to convene the conference, prominent Nigerians would be forced to come together and do it themselves after which the country’s destiny would be changed for the better without recourse to government.

Though the Deputy Speaker of the Lagos State House of Assembly, Taiwo Kolawole, expressed the support of the House for their action, saying the House has raised alarm over the deployment of soldiers to the state which promoted the fight against military rule, the protesters asked the members to join them at Ojota if they really supported the rally.

The protesters also defied threats by some police officers to disperse them from the Assembly.

Meanwhile, The Lagos branch of the Nigerian Bar Association, NBA, this morning, filed a law suit to challenge Federal Government’s deployment of soldiers in Lagos State.

The suit, filed at the Lagos High Court, Igbosere, is seeking the withdrawal of the military men deployed in Lagos, on Monday, to quash street protests sparked by the sudden removal of fuel subsidy on 1 January.

The case is filed against President Goodluck Jonathan; the Defence Minsiter, Bello Muhammed; the Chief of Defence Staff, Air Vice-Marshal Oluseyi Pentinrin; the Inspector General of Police, Hafiz Ringim; and the Minister of Justice Attorney General of the Federation, Bello Adoke.

No date has been fixed for hearing on the suit, which was accompanied by an affidavit of ‘urgency’.

Lawyer and activist, Ebun Olu Adegboruwa, and member of the Lagos NBA, said the action became necessary to “determine the course of our democracy, especially the rights of the people”.

Adegboruwa, who spoke to P.M.NEWS on telephone, lamented that government’s resort to quashing dissent and intimidating citizens with the military, has further soured the country’s democratic experience.