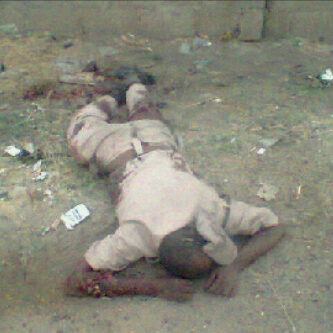 Immigration officer, victim of the blast at immigrations office.

Islamic fundamentalist sect, Boko Haram has reportedly bombed the Zone 1 Police Headquarters in Kano and other parts of the city in coordinated attacks. And a jittery state government has slammed a 24-hour curfew on the sprawling city, Nigeria’s second most populated after Lagos.

The death toll is reportedly high from the blasts that rocked the city.

Huge smoke was seen billowing from the scenes of the attacks which took place today.

The AFP reported at least two policemen were killed after the suicide blast at the police headquarters.

There were several other major explosions.

The city of Kano, the largest in Nigeria’s mainly Muslim north, erupted in chaos, with some 20 explosions heard and at least five police offices thought to have been targeted.

Local television reported that scores were feared dead in the attacks. Police were not responding to phone calls, but the state government announced a 24-hour curfew until further notice.

It was not immediately clear who was behind the violence, though previous such attacks in Nigeria’s north have been blamed on Islamist group Boko Haram.

A senior police source said the suicide blast occurred at a regional police headquarters. Residents reported blasts and gunfire at the state police headquarters and said that at least two other police posts appeared to have been targeted.

An explosion was also heard in the area of a secret police office.
“There was a suicide attack on the police zone 1 headquarters,” the senior police source said on condition of anonymity. “So far two officers have been killed and the bomber also.”

The country’s emergency agency confirmed several explosions, including one reported at the regional police office, but were unable to get immediate access due to blocked roads.

“Rescue workers evacuating victims to hospitals. No official casualty figures for now.”
An emergency official in Kano said he was trying to access affected areas, but roads were blocked.

“There are so many of these heavy blasts around the town,” said Abubakar Jibril. “They have blocked the road.”
An AFP journalist heard what sounded to be some 20 explosions coming from at least two neighbourhoods in the city. Smoke could be seen billowing from the areas.

The loud explosions resulted in chaos, with motorcycles and cars fleeing the areas.
“It’s terrifying where we are now,” one resident said. “Bombs are going off inside the police headquarters, and then shootings between police and some gunmen.”

While earlier reports had suggested an immigration office had also been targeted, it later appeared that a nearby police station had been the object of the attack.

A resident in Marhaba district told of a fierce gun battle, adding: “Now my dress is drenched in blood because I had to help carry someone shot in the shootout.”

Another resident said a police station in the Unguwa Uku neighbourhood also appeared to have come under attack.
“Several explosions have occurred at the Yar Akwa police station,” he said. “Everybody is running for his life. It’s chaotic.”

“From my window I saw huge fire and plumes of black smoke from the SSS building,” another resident reported, referring to the State Security Service.

Scores of bomb blasts in Nigeria’s north have been blamed on the Islamist group Boko Haram.
President Goodluck Jonathan declared a state of emergency on December 31 in parts of four states hard hit by attacks blamed on the group.

Kano is not included in the state of emergency and has not been hit by any of the recent major attacks, most of them having occurred in the country’s northeast.

The state of emergency has not stopped attacks: the areas targeted have spread beyond the locations covered by the decree.

The limitations of the Nigerian authorities were recently highlighted when the alleged mastermind of a Christmas day attack outside a church that killed 44 people escaped police custody in suspicious circumstances.

Attacks specifically targeting Christians have also given rise to fears of a wider religious conflict in the country, with Christian leaders warning they will defend themselves. Some have even evoked the possibility of civil war.

However, attacks blamed on Boko Haram have included a wide range of targets, including Muslims.
The group also claimed responsibility for the August suicide bombing of UN headquarters in the capital Abuja that killed 25 people.

More details about the casualties and extent of damage caused by the explosions to come in subsequent reports from our correspondent.
. With reports from AFP