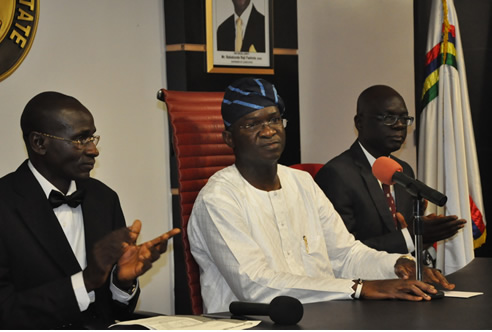 Governor Lagos State Governor, Mr Babatunde Fashola(SAN) on Friday received members of the Nigeria Bar Association, Ikeja Branch, who brought a letter of protest against the occupation of Lagos Streets by soldiers, stressing the need for a better understanding of citizens rights and duties in a democracy.

The Governor who spoke after receiving a letter of protest from the representatives of the association at the Conference Room of Lagos House, Ikeja said rights creates duties.

Governor Fashola who spoke against the backdrop of the deployment of soldiers on the streets of Lagos to quell peaceful demonstrations said: “The rights of a certain section to protest does not override the rights of another section to say they disagree. The views I take about a matter are my own views. It would be very presumptuos to assume that those views represent the majority interest and therefore if I want to set up shops by the road side, I owe it a duty to also allow free movement.

“That is when that duty starts, that is why that right does not become absolute.”

He explained that sadly there are still lessons to be learnt by all about the reality of a common humanity, adding: “Once we understand that, we will not be offended by the simple fact that people query us for actions that we take.”

The Governor who said that he has worked for several years in legal practice about defending rights, explained that his administration has however been mindful that its decisions will have consequences on the people as it respects the people’s rights to complain about government’s action.

“We went to sing and dance before them when we were seeking their votes and they did not feel irritated. It is a social contract. We must listen to them. We respect the rights of the people who are affected by those decisions to complain that: ‘this is where the shoe pinches’.

“I respect those rights and I understand those complaints. That is why I said we cannot feel irritated that people complain about what we do and that they sing and dance in the process of doing so,” he explained.

The Governor stated that since the deployment of the soldiers, he has taken some steps including writing to President Goodluck Jonathan asking him to direct the withdrawal of the military men from the streets of Lagos.

Governor Fashola who also took time to speak on attempts being made by the military authorities to justify the deployment of soldiers said indeed there is OP- MESSA joint military patrol team that has been in place in Lagos since the time riots took place in Idi-Araba in Lagos.

He explained that the deployment of the OP-MESSA then was to assist the police in preventing crimes and consisted of officers of the Army, Navy and Airforce who were provided with vehicles that were clearly marked OP-MESSA provided by the Lagos State Security Trust Fund.

He added that when he assumed office, he wrote to request that the late President Umaru Yar’Adua to allow the military men remain in Lagos for them to assist in fighting crime and also repeated the request to President Goodluck Jonathan in May 2010 to assist in combating crime while also standing in the way of clashes between police and soldiers.

He noted that they have never barricaded the streets of Lagos as they have done since Monday.

Governor Fashola who stated that he understands the concern of members of the Bar and Lagosians on the development urged everyone to remain calm during this period of ’harmattan discontent’.

“Bad times don’t last. We will outlive it. This is a land of freedom where many battles were fought for the soul of this country. This is where all of the oppressed people have always brought their battles. And this is one battle that the people will surmount. Our will is strong and our cause is just,” Governor Fashola asserted.

The Governor said he is consulting with the State Attorney General who is also consulting other lawyers to get an aggregate of opinions which will be deliberated upon by the State Executive Council on what next step to take.

Speaking earlier, the Chairman of the Nigeria Bar Association Ikeja Branch, Mr Adebamigbe Omole said the members including frontline activist, Mr Femi Falana were at the Governor’s Office in respect of the presence of military men observed since Monday following the peaceful protest across the state over an increase in the pump price of petrol.

He said the branch believes that something urgent needs to be done over the issue because anywhere military men are stationed there is the possibility that they tend to dominate their environment through intimidation.

“We believe we cannot afford to sit down and watch the flagrant disobedience of the law. The soldiers are all over Lagos. We believe Lagos State Government may take legal action over the development to seek to know if it was right to take over Lagos without any insurgency.”

He added that the members believe that opportunity should not be given to those who do not want peace in Lagos to use the opportunity of their presence in the state to cause crises.

Speaking later in an interview with newsmen, one of the elders of the Ikeja Branch, Mr Femi Falana said the rights of the people to engage in protest has been upheld by the Court of Appeal and described what is going in Lagos as a capricious rape on the Constitution by the President which the people will not allow.

He said it was very shameful that a peaceful protest of eminent Nigerians like Professor Ben Nwabueze and Dr Tunji Braithwaite was broken up by the police through release of teargas to disperse them.

The event was witnessed by the Attorney General of the State, Mr Ade Ipaye and many members of the NBA Ikeja including the Secretary, Mr Adesina Ogunlana.