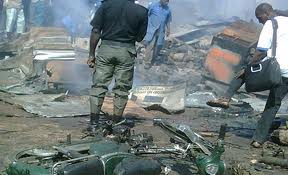 The death toll in Friday’s coordinated bombing of police and other targets in Nigeria’s Kano state, is on a record high, with various independent sources giving fatality figures as high as 150, in contradistinction to official tally of seven.

Although a 24-hour curfew has constrained movement in the city, journalists who were able to brave the odds and visit the hospitals and the morgue have given mind boggling accounts of a high number of casualties, making Friday’s strikes one of the deadliest, and the worst by Boko Haram insurgents.

A BBC reporter said today that he personally counted 150 corpses related to the attacks at the Kano Morgue today. The Associated Press, quoting an unidentified hospital source gave the death tally as 145. And the Red Cross told the Agence France Presse that 121 people have died. All the figures are at wide variance with the official figure of seven.

Earlier today,the BBC reported today that witnesses said they have counted more than 20 bodies in the city, now slammed with a 24-hour curfew by the state government. Government said the curfew would remain in force until further notice.

There were reports of many bodies littering the streets and wagons being sent to collect them.

Police stations and the state police HQ were among the targets, and gunfire was heard across the second biggest city.

A spokesman for the group, Abul Qaqa, told journalists in the north-eastern city of Maiduguri, the group’s base, that it had carried out the attacks because the authorities had refused to release group members arrested in Kano.

The group has been behind a recent campaign of violence in the mainly Muslim north.
In a statement, police said “seven casualties have been confirmed from different locations of the attacks” in Kano.

But eyewitnesses said they had seen bodies littering the street and being loaded into wagons. More than 20 were counted.

The police statement said four police stations around the city, the headquarters of the State Security Service (SSS), as well as passport and immigration offices were targeted.

The BBC’s Mark Doyle, in the outskirts of Kano, says he has seen one police station with its roof completely burnt off, though it was not clear whether this was caused directly by an explosion or by fire.

The atmosphere there is nervous, and a large crowd outside the police station quickly dispersed when soldiers arrived, our correspondent adds.

He says this is Boko Haram’s most serious attack on the police and is deeply embarrassing for the authorities.

The wounded were reported to include foreigners from an area near the SSS headquarters, where many expatriates – particularly Lebanese and Indians – live.

There was also a shoot-out at the headquarters of the state police in the city’s eastern district of Bompai, reports said.

One local man, Andrew Samuel, described the scene of one blast: “I was on the roadside and I just heard a ‘boom’. As I came back, I saw the building of the police headquarters crashing down and I ran for my life.”

Witnesses said the bomber who attacked one of the police stations pulled up outside the building on a motorbike, dismounted and ran inside holding a bag.

Nigeria’s Channels TV said one of its reporters, Enenche Akogwu, had been killed in the attacks.
It said he had been “shot by unknown gunmen suspected to be members of the Boko Haram sect”, outside the state government house.

He was the second journalist to be killed by the Boko Haram sect. Last year, an NTA cameraman, accused of spying was killed by the militant sect.