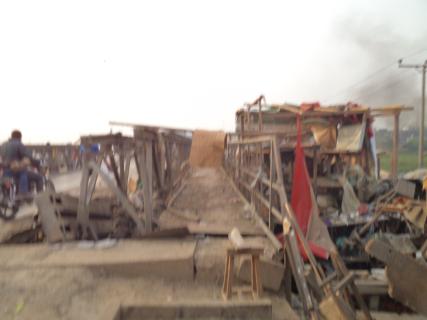 On the eve of the visit of Nigeria’s vice president, Namadi Sambo, to President Goodluck Jonathan’s state, explosives suspected to be Improvised Explosive Device,IEDs,were used to blow up a Toyota Corrolla car by the Government House gate and the Tombia bridge in Yenagoa,Bayelsa State,late last night.

The explosions are on the eve of the expected visit to the state capital by Namadi Sambo,the Vice-President, and national campaign committee of the Peoples Democratic Party,PDP, to flag off of the campaign of Mr. Seriake Dickson for the governorship race. The campaign will be kick-started today.

No group has claimed responsibility and the reason for the bomb attacks.

Governor Sylva stated in the statement signed by his spokesman,Mr Doifie Ola,: “I have just been informed of two explosions that rocked parts of Yenagoa, the Bayelsa State capital, late Friday night.

” Details of the incident are still sketchy. But the Government of Bayelsa State condemns in the strongest possible terms any attempt to return the state to the dark days of insecurity.”

Sylva said that his administration places high premium on peace and security and has invested so much to attain the peace and quiet that atmosphere currently in the state.

He said that if there is anything that both friends and foes of the current administration agree on, it is the clear fact that Bayelsa State has since the inception of the Sylva-led government emerged from the darkness of insecurity into the marvellous light of peace and stability.

The Governor further said that it will be most callous of anyone to try to shatter this peace,adding that it is most curious, and in fact unfortunate, that this new spectre of bombing is happening on the eve of a so-called campaign flag-off by persons who want to be entrusted with the welfare and security of Bayelsa people.

Sylva lamented that the whole world watched in awe and utmost disgust the wanton militarisation of Bayelsa State towards the end of last year, against the consent of the governor and chief security officer, at a time of peace, when residents were going about their legitimate businesses.

A virtual occupation force was brought in to militarise the state on purpose to force a controversial party primary on Bayelsa people. After the accomplishment of that immoral intent, we have strong reasons to believe that those who had militarised the state without cause are now seeking to give themselves some satanic predicate for yet another round of militarisation to accomplish the next phase of their ungodly political enterprise.

It is worrisome that these things are happening in the home state of Mr. President, at a time the nation is faced with a critical security challenges.

The Governor further advised the peaceful populace of Yenagoa to remain calm, but strong and vigilant and be determined to work together to overcome these challenges.