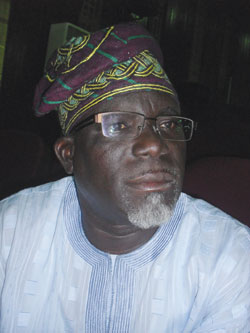 Barrister Tunji Bamishigbin, film producer, actor and director, who is also a co-organiser of the Afro-Hollywood Awards, UK, speaks about the challenges of the awards, the film industry and other issues

The 16th Edition of Afro-Holywood awards took place last year; how was it?

Well, we thank God that we have never disappointed anybody, I have always been the solicitor to the awards committee and have been part of the selection process. As you know, the African Voice published in UK by Mike Abiola has been able to sustain the awards through thick and thin in the last 15 years.

Does the award have any foreign affiliation?

It is a complete entity on its own. If you can remember, Mike Abiola who is the man behind the award was the publisher of the now rested Nigerian Video magazine in the 90s before he went to UK and he has been part of Nollywood. So he has all it takes to organise a legitimate award and for me to be part of it, I believe in the award. In fact, I have to confess that it has not been easy as I have to travel most of the time organising and making sure those that won the awards get to UK and they are well taken care of and in the process, I have to make a lot of sacrifice to ensure that the event holds. For example, I have to be in UK on Ileya day, leaving my family at home. For me, I see it as my own sacrifice to the movie industry. For the first time in history, we did a Nigerian edition last year and it will be a continuous one which will serve as a teaser for the UK edition. For you to know that it is a recognised award, the Nigerian High Commission in UK is also in support of the organisers.

How do you select winners?

Afro-Hollywood is a recognition award for those who have been part of Nigerian movies for them to be recognised and appreciated. It is also meant for those who are doing well in their fields of endeavour.

Unlike in the past editions, there was an event in Osogbo, Osun State, in which winners were picked out of those nominated. Why was this so?

It is a normal thing that happens every year because, apart from sms, the award committee will meet and pick from the list. Though we had been doing it in Lagos, from last year we started taking it to other states.

How will you rate the development of Nollywood, so far?

Nollywood has come of age and with time, it will find its root. It is an evolving industry; young people come virtually on daily basis, and I believe it may get to the level of Hollywood or surpass it because there is no superiority of content. We use the same human and material resources to produce films. To me, the Americans don’t have stories anymore; they have to be stories from fiction and other things but back home, we still have lots of stories which the world is waiting to watch. I believe that with development in technology we will get there. It is not easy because the Americans did not wish Nollywood well.

As an experienced actor and producer who has participated in both Yoruba and English films, do you believe in Nollywood?

Well, I don’t like how the name, Nollywood, emerged because it is not quite good for us. If the American film industry is Hollywood why should we name ours Nollywood? To me, we are putting the Nigerian film industry in a second class position. Who tells you that the Nigerian film will not emerge like that of Hollywood with technology and other things? Though the government is showing interest now by proposing to lend film producers money, I am not in support of that. To me, whoever wants to produce films should go and look for money. All we need is an enabling environment, like film villages, studios, airport and a house where films can be shot. All these can be given to us at a reasonable amount.