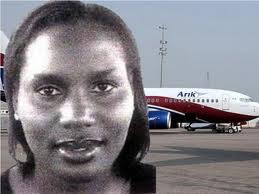 An air stewardess who was caught trying to smuggle a quarter of a million pounds worth of cocaine into the UK has been jailed for five and a half years.

Chinwendu Uwakaonyenma Ogbonnaya, 29, from Lagos in Nigeria had flown into London’s Heathrow airport as a member of crew on an Arik Air flight from Lagos on 18 December 2011.

During searches by UK Border Agency officers at the airport’s crew clearance facility, searches of her luggage revealed that she was carrying a rucksack with a false back.

Officers discovered packages of cocaine hidden behind the false back.

Forensic tests later showed the packages contained approximately two kilos of high purity cocaine, which if cut and sold on the UK streets would have had a value of around £250,000.

Ogbonnaya claimed that she had been given the bag by a friend and that she was unaware it contained drugs.

However, she later pleaded guilty to attempting to import a class A drug, and a judge at Isleworth Crown Court in west London today (Thursday 2 February) sentenced her to five and a half years in prison.

She will also face deportation at the end of her sentence.

“The cocaine found here was of a very high purity and there is no doubt that had this woman not been stopped it would’ve ended up being cut and sold on the streets of London.

“Ogbonnaya sought to abuse her position as a crew member by bringing these drugs in. As a result she now faces a long time away from home and behind bars.

“UK Border Agency officers are on constant alert to keep class A drugs and other banned substances out of the UK and take them out of the supply chain before they reach the streets.”