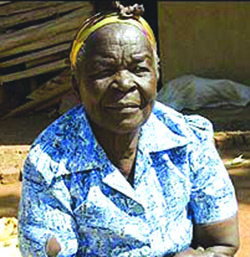 President Obama’s grandmother, Sarah Obama, is recovering at her home in western Kenya after an accident that, judging by the condition of the vehicle, could have been much worse.

“God is with me, because if you could have seen the wreckage that we came out of safe, one would wonder,” Sarah Obama said Monday.

Police in the town of Kisumu say the 91-year-old was travelling to her home in the village of Kogelo Saturday night when the driver lost control, and the vehicle rolled into a ditch.

All five people in the car, including her two bodyguards, were taken to a hospital for treatment. All were released with minor injuries.

A hospital spokesperson says Sarah Obama was bruised and in shock when she arrived at the hospital. She was released about two hours later.

“You can see I was not injured save for this small scar on my right hand and I am not even using a walking stick,” Obama said.

She said friends from as far away as the United States and the Middle East have been calling to check on her, but she assures them, “Hakuna tabu!” That means ‘no problem’ in Swahili.

Sarah Obama is the step-mother of President Obama’s Kenyan father. She has been to the U.S. a few times, and the president has been to the village to visit with her and other relatives three times. In his memoir, “Dream From My Father,” Obama called her “Granny.