Nigeria’s Christmas Day bombing suspect, Kabiru Abubakar Dikko (a.k.a Kabiru Sokoto) was hiding in clothes rack at the residence of an accomplice when he was arrested, Marilyn Ogar, spokesperson for Department of State Security told journalists Friday while parading the accused in Abuja.

The accused, who is alleged to be the mastermind of the 25 December 2011 suicide attack against St. Theresa Catholic Church which claimed 42 lives and grievous injuries to scores of others escaped from a team of policemen, led by Assistant Commissioner of Police, Zakari Biu. The latter had taken him for a search at his house in Abaji, Federal Capital Territory on 15th, January, 2012.

He was re-arrested at Mutum-Biu in Gassol Local Government Area of Taraba State aroud 4 a.m on Friday morning, contrary to the earlier report that he was picked up last night. 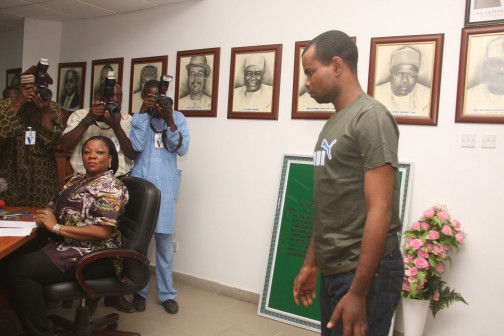 “On his escape, he had taken refuge at Toto Local Government Area of Nassarawa State before he fled to Taraba State where he was eventually arrested”, Ogar said, adding that the suspect was arrested by a team of DSS and soldiers.

P.M. NEWS gathered that four persons were arrested alongside the suspect.

The suspect confirmed that he was Kabiru Sokoto when he was questioned by journalists. Beyond ascertaining his identity, the media men were not allowed to question him further.

Sokoto, sources told P.M. NEWS unwittingly gave himself away when he made a call to the alleged spokesperson of Boko Haram, Abu Qaqa who is presently in custody of the DSS.

Ogar added that contrary to popular belief, the suspect was from Sokoto State where he was also the leader of the militant sect.

“Kabiru was instrumental to the visit of late National leader of the Boko Haram sect, Mohammed Yusuf to Gagi Village in February 2009, during which he (Kabiru) was declared the leader of the sect in Sokoto State”, said Ogar.

The suspect, according to information released by the intelligence agency was born to the family of Umaru Jabbi of Gagi Village, Sokoto South Local Government Area of Sokoto state.

Kabiru was adopted by his maternal uncle, Abubakar Dikko upon the death of his father. He was subsequently renamed after the Uncle.

The suspect dropped out from College of Nursing and Midwifery after failing some of his papers in 2007.

“We are poised to bring to an end the activities of a few unscrupulous elements and to also warn that the long arm of the law will always catch up with those who perpetrate evil”, Ogar said, while expressing the determination of the agency to tackle the security challenges confronting the country.