Zambians are the champions of Africa 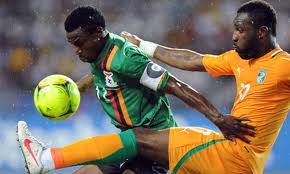 Zambia have been crowned the champions of Africa after edging out the star-studded Ivory Coast team 8-7 in penalty shootout in the final match in Libreville Sunday night. The thrilling game had ended goalless after extra-time.

Chelsea striker and Ivory Coast captain, Didier Drogba missed a penalty at the 71st minute and Arsenal striker, Gervinho also threw away his side’s final penalty during the shootout, paving way for the lads from Zambia to carry away the trophy.

With the sides goalless after extra time Zambia’s Stoppila Sunzu converted the magic spot kick after Arsenal striker Gervinho missed for the Elephants.

The result meant misery for hot favourites Ivory Coast, who failed to claim the title despite not conceding a goal throughout the entire competition until Sunday’s shootout.

It also revived memories for Didier Drogba, who missed a penalty in the second half of normal time, and company of their 2006 penalty shoot out final defeat to Egypt in Cairo.

Zambia, motivated by the memory of the 1993 national team wiped out in a plane crash off the Libreville coast, went into the 2012 climax as outsiders.

But they covered themselves with glory, hassling and harrowing their star-studded rivals all the way to the penalty shoot-out, and then holding their nerve to prevail in the dramatic, barely watchable denouement.

Ivory Coast coach Francois Zahoui fielded the same side that saw off Mali 1-0 in the semi-final.

His Zambian counterpart, Herve Renard, recalled striker Emmanuel Mayuka, after his starring role in getting the decisive goal in the 1-0 last four defeat over Ghana.

A minute of silence was observed before kick-off in memory of the 74 people killed in the Port Said stadium slaughter in Egypt.

The game was only seconds old when Zambia almost took a shock lead, with keeper Boubacar Barry doing well to save Nathan Sinkala’s close range shot off Katongo’s quick pass from a Rainford Kalaba corner.

Renard was forced into an unscripted change when defender Joseph Musonda limped off in tears on 11 minutes – Nyambe Mulenga took his place.

A shaky start by Ivory Coast gave Zambia hope of an upset and Kalaba’s 30m freekick wasn’t far away after taking a deflection off Cheik Tiote’s leg.

The Elephants put together their best passage of play approaching the half hour mark, a neat Drogba backheel setting up Yaya Toure only for the Manchester City midfielder’s angled shot to go wide of the far post.

A hugely promising first half from Zambia had the Elephants’ defence, marshalled by Kolo Toure, under more pressure than they would have wanted, with Katongo leading from the front.

Zahoui, ressembling a New York cop with black trenchcoat and baseball cap, walked into the dressing rooms at half-time with a face like thunder.

The second half began with a deathly hush descending on the stadium – the final in desperate need of the kiss of life in the guise of a goal.

And on 72 minutes one should have come after Ivory Coast were awarded a penalty when Issac Chansa and Mulenga barged into Gervinho.

Drogba stepped up but his woeful attempt went soaring into the night sky, even though he appeared to divert blame to the pitch, glaring at the spot.

This was his second miss from the spot after he had a penalty saved in the quarter-final win over Equatorial Guinea, where he went on to score twice.

One minute later Max Gradel’s shot from the box had Zambia keeper Kennedy Mweene beaten, but it rolled wide of the far post.

In the 95th minute, substitute Felix Katongo crossed from the right for his brother Christopher with only Barry’s toe diverting the goalbound ball off the near post.

There was high drama once the penalty shoot out got underway, with Kolo Toure missing the Ivorians seventh penalty, but Zambia’s Kalaba also missing his to leave the sides still inseparable.

Then after Gervinho failed in his attempt it was left to Sunzu, the defender who plays his club football in the Democratic Republic of Congo, to give Zambia a historic first title, and consign Ivory Coast to another wretched defeat.

The match was watched by the African Union leader, President Boni Yayi of Benin, the host President and both the leaders of Ivory Coast and Zambia, FIFA President, Sepp Blatter and football legend, Pele.

.List of Africa Cup of Nations champions after Zambia defeated Ivory Coast on penalties in the 2012 final at Stade de l’Amitie Sunday: