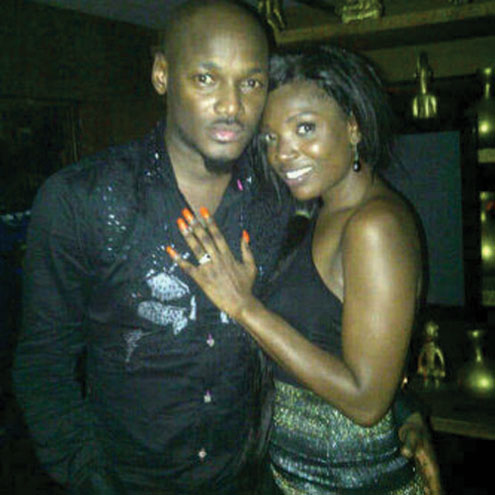 In what could be described as the most shocking but pleasant revelation of the year, multiple award-winning singer, Innocent Ujah Idibia, popularly known as Tuface Idibia, has proposed to actress Annie Macauley, one of the mothers of his five love children. The sixth one is on the way.

The Benue state-born singer was said to have made the revelation on Valentine’s Day to the surprise of Annie and his fans at Club 10, Victoria Island, Lagos. The club is owned by former Super Eagles captain, Austin J.J. Okocha.

P.M. NEWS gathered that when Tuface made the proposal last night Annie apparently could not control her emotions as she shed tears of joy, cuddling the music star. She later wrote on her Blackberry profile status “OMG (Oh My God) the love of my life just proposed to me.” She also tweeted this morning that “I’m serving a living God…”

The romance between Tuface and Annie had been on for over 10 years now and just two years ago, she had a daughter named Issabel for him. Tuface has four other kids, two each from Sumbo Ajaba and Pero Adeniyi respectively.

Few weeks back, news filtered like wild fire that Tuface was said to be expecting his sixth child, having impregnated Pero the third time.

Since his relationship with Pero, Annie and Sumbo started, many fans of Tuface had been wondering who he will eventually decide to get married to. That riddle has finally been resolved. But his proposal to Annie has also generated mixed feelings.

While some are of the opinion that Annie truly deserves the proposal, having dated Tuface even before he became a mega star, others who spoke to P.M. NEWS this morning said they are not sure the African Queen crooner has made up his mind for real.

“You know he made the proposal at a club after long hours of fun. I will only believe this if he confirms the statement later today or tomorrow. He might not really plan to make that statement anyway,” a popular music producer who craved anonymity said.

When our reporter called Efe Omorogbe, Tuface’s manager this morning, he said “I’m just waking up now because I did some productions over night. I’m not in a position to talk about that for now, may be later in the day.”

Annie Macauley was one of the ladies that starred in Tuface’s award-winning music video, African Queen.

She started her acting career some years back after emerging one of the runners-up in Sola Fajobi’s reality show, Next Movie Star.

Annie lost the first and second positions of the competition to Kingsley Ogboso and Tonto Dike respectively, but ever since, her profile has been on a steady rise in the entertainment industry.