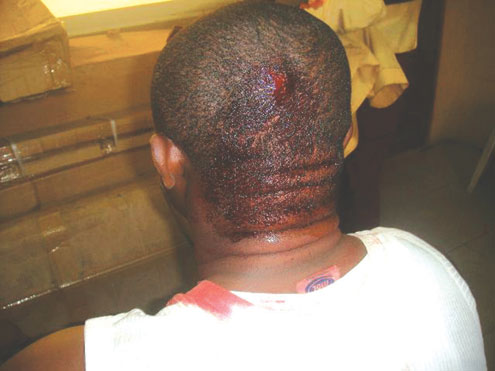 The Special Offences Court at Alausa, Ikeja in Lagos, southwest Nigeria has sent 21 tipper drivers to three months imprisonment for stabbing an official of the Lagos State Traffic Management Authority, LASTMA, in the head.

The offenders who were arrested at Ketu Tipper Park were said to have beaten and stabbed an official of LASTMA, Mr. Akingboungbe Olalemilekan in the head while performing his legal duty at mile 12 on 12 February, 2012.

The convicts, who were arrested on Tuesday by the enforcement unit of LASTMA from the agency’s headquarters, were identified as drivers and mechanics. They were arraigned on a three-count charge ranging from obstructing enforcement agents from carrying out their legal duties, breach of peace and assault.

Out of the 22 offenders arraigned in court, 21 of them pleaded guilty to the charge except for 43-year old Azeez Olawunmi who pleaded not guilty and was granted bail in the sum of N60,000 with two sureties.

The sureties must be senior civil servants with landed property in Alausa, Ikeja axis so as to ensure his appearance on the day of the trial.

The court, however, jailed other 21 offenders that pleaded guilty with an option of fine.

Narrating his ordeal, one of the affected officers recounted that a tipper lorry with registration number XZ 965 EKY was obstructing traffic at Mile 12 and was arrested by the patrol team and that on the way to LASTMA office at Idi-Iroko, the driver mobilised area boys and attacked the patrol team with various dangerous weapons, thereby inflicting serious head injury on Akingboungbe.

It was during the fracas that they overpowered the officers and took the impounded vehicle away.

General Manager, LASTMA, Engr. Babatunde Edu condemned the attack and implored motorists to desist from taking laws into their hands by attacking LASTMA officials who were on official duties to ensure free flow of traffic on the road.

He urged members of the public to send report or complaints against any errant LASTMA official to the relevant quarters for appropriate action to be taken.

Edu also called on Lagosians to obey traffic rules at all times and support the efforts of LASTMA so as to create “the Lagos of our dream.”