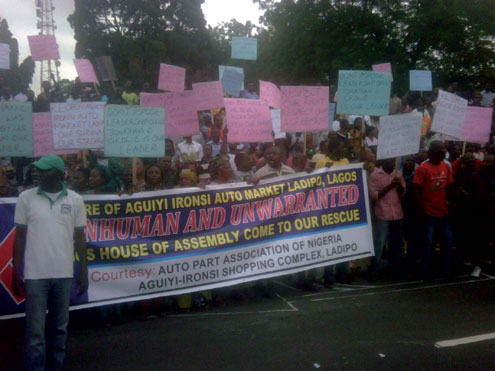 •The traders at Alausa this morning.

Over 2, 000 traders at the Aguiyi Ironsi Auto Market located at Ladipo, Mushin, Lagos State, this morning stormed the state House of Assembly to protest the closure of the market by the state government.

The traders, most of whom were in tears throughout the protest, carried placards with various inscriptions such as: “Respect Our Right, Respect Our Agreement,” “Don’t Impose leadership on Us. Jonathan C. Okolie Is Our Leader,” “Lagos House Of Assembly, Help Us! You Are Our Last Hope,” “ Re-open Aguiyi Auto Market, Our survival, Our Strength, “An Idle Mind Is The Devil’s Workshop. Open Our Market For God’s Sake!”

They also sang songs appealing to the state government to re-open the market which they claimed has been closed by the state Ministry of the Environment for over three months now.

They described the closure as inhuman and unwarranted and called on the state Assembly to come to their aid as they have remained law abiding citizens of the state and the nation.

Speaking amidst tears, the President of the Auto Part Association of Nigeria at the shopping complex, Jonathan Okolie, said their troubles started with the closure of the market on 8 December 2011 by the Environment Ministry which claimed it was due to environmental issues.

He said the market was however re-opened after a week when the ministry could not find anything against them.

Okolie further alleged that some people, who want to take over the leadership of the market were behind it and were using the ministry against the traders.

“On 23 December 2011, officials of the ministry came again and closed down the market, claiming the order was from above.

“This was the same day I was granted bail after the same people who want to take over the leadership of the market wrote a petition against me alleging that I kept thugs and guns.

“I arrived from detention that day and traders were excited, but that same evening, they came and closed the market, telling us they wanted to place someone else who is not a trader as leader in the market,” he said.

According to him, the refusal of the traders to accept the request resulted in the closure.

Deputy Speaker of the Assembly, Taiwo Kolawole, while thanking them for not taking the laws into their hands, said though the speaker, Adeyemi Ikuforiji, was not around, their petition will be deliberated upon by the members of the House and that justice must be done.