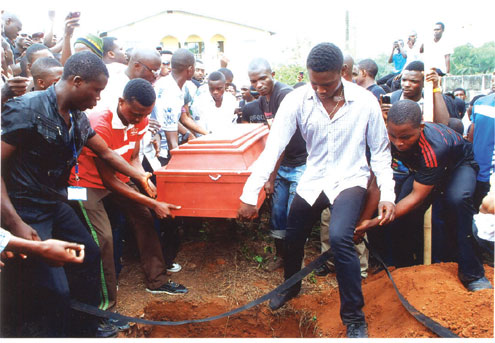 •Remains of TASUSED 400 level student, Mr. Fashina Olatunji David, of the Social Work Dept, who lost his life in an accident on their way to Abeokuta to protest against the scrapping of TASUED, being buried yesterday at Ijagun community cemetery.

The student of Tai Solarin University of Education, TASUED, Ijagun, Ogun State, Southwest Nigeria, who died Tuesday in an accident was Wednesday afternoon buried amid tears and wailing.

P.M.NEWS can authoritatively reveal that the boy was among those that were involved in an accident when the students were going to Abeokuta to stage a protest against the merging of their school with the Faculty of Education, Olabisi Onabanjo University, OOU, Ago Iwoye.

The deceased known as Olatunji Fashina, a.k.a. Humble T.J., was a 400 level student of Social Work in Sociological Study.

He was before his death the President of the Rotaract Club of the school and the PRO of his department.

During a service of songs organised for him Wednesday morning at the OGD Hall in the campus before he was buried, the students insisted that the struggle to regain their institution will continue.

They said the spirit of Fashina will not forgive them if they abandoned the struggle.

Those who attended the service of songs were the Vice Chancellor of the institution, Elder Akinwunmi; Director Students’ Affairs, Dr. Oduwole; all the ASUU executives; representatives of NASU; SUG executives led by its president, Abdulahi Oyekanmi, a.k.a. Plato; and other students.

Some residents of the town and the neighbouring communities such as Imaweje, Ijele, Odo-epo among others also attended.

Our correspondent gathered that the parents of the deceased were in Badagry, Lagos state, but were not at the funeral. Some family members were, however, present.

P.M.NEWS further gathered that Fashina had his early education at Ajegunle area of Lagos state.

He was buried at the Ijagun cemetery amid tears around 3 p.m. Wednesday.