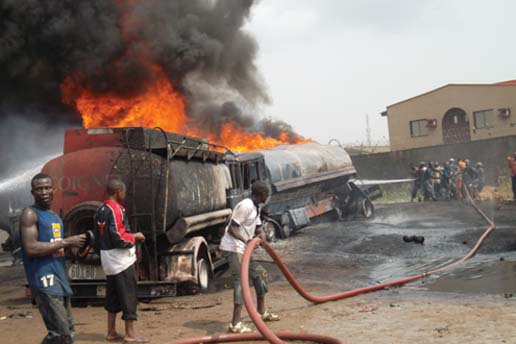 About three trucks filled with diesel were burnt at an alleged illegal diesel depot at Ojota, Ikeja, Lagos State, Southwest Nigeria, Thursday afternoon when fire broke out at the depot.

The cause of the fire outbreak which engulfed a vast expanse of land on Abayomi Adelaja Drive, Olusosun, Ojota, could not be ascertained as at press time, but eyewitnesses to the incident gave different accounts as to the actual cause.

One version has it that the fire broke out when some diesel dealers with their drivers operating in the area were transferring diesel from one truck to another. Sources said there were about fifteen trucks, waiting to load their trucks. Another account, has it that fire broke out when some greedy diesel dealers were mixing original diesel with spirit and kerosene to maximise profit.

The source further said that the dealers have been in the nefarious business for quite a long time.

“The place is always crowded with truck drivers who usually come there to buy cheap and adulterated diesel, rather than patronising the filling stations for genuine oil.

“The Lagos State government and security operatives should urgently investigate the unwholesome activities of these agents of destruction to prevent further damage to the economy of Lagos State,” the source stated.

When P.M.NEWS visited the scene on Thursday afternoon, Lagos State fire fighting personnel were seen battling to put out the fire which had already burnt down about three trucks.

It was gathered that ten other drivers who had lined up their trucks to load diesel hurriedly drove away immediately the fire broke out.

The police at Alausa Police Division, were also at the scene to maintain law and order.