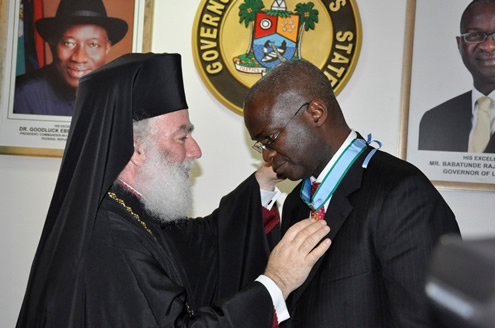 Lagos State Governor, Mr. Babatunde Fashola SAN (right) being decorated with the Lion of Alexandria Medal by the Pope of the Coptic Orthodox Church of Alexandria, Pope Theodore ll (left) during his courtesy visit to the Governor at the State House, Alausa-Ikeja, Lagos, on Monday, February 20, 2012.

Governor Fashola, who spoke at the Lagos House Ikeja while playing host to the Patriarch and Pope of the Coptic Orthodox Church of Alexandria, Pope Theodore 11 of Alexandria, said the Church and the State have a shared responsibility to provide solace to suffering humanity.

The Governor told the Patriarch, “People all over the world are facing extremely challenging times. The human race is challenged in many ways and it is people like you who minister the word of God that millions and billions of people look up to for solace. They also look to people like us in Government to deal with those other sides of their lives that are not spiritual”.

“I think, in many ways than we may probably have realized, the Church and the State continue to share a responsibility over the welfare of the human race”, Governor Fashola said adding that one such responsibility is peaceful co-existence among people of diverse Faith.

Stressing the need to respect the rights of people to worship God in the way they choose, Governor Fashola declared, “In Lagos we co-exist across ethnic and religious lines. And this kind of co-existence continues to take place between Christians and Muslims, inter-marrying so that the integration is getting deeper”.

Governor Fashola expressed joy that many Greek and Egyptian organizations are currently operating in Nigeria and Lagos State and contributing to the economy of Nigeria and Lagos with which to cater for the physical welfare of the people.

“I am happy to acknowledge that on the physical side, so many of your people are playing their roles, working with our Government in developing the non-spiritual side of our people’s life. The Leventis Group, the Flour Mills Group and so many groups that have contributed to the continuous development of the Nigerian and the Lagos Economy”, the Governor said adding that as a Government, his administration provides the support necessary for the organizations to prosper.

He cited Elsewedy, an Egyptian company currently manufacturing transformers for Power distribution in the State, as example of the relationship between Lagos and Egypt explaining that the company is now expanding its sphere of operation to begin to manufacture electricity metres.

“So beyond the spiritual, there is a lot of inter-governmental activities, commercial activities for the development of the people of God”, Governor Fashola said adding that it is this kind of partnership between Church and State that brings succour to humanity.

Earlier, the Patriarch said he was at the Lagos House to pay a courtesy visit to the Governor as part of his missionary journey across the West African sub-region pointing out that before he was elevated to his present position of Patriarch, he worked for many years in various capacities as missionary in many parts of the world including Africa.

According to the Patriarch who said he was born in Greece but lives in Egypt, the Coptic Orthodox Church of Alexandria has existed for over 2,000 years and has a network all over the Continent of Africa adding that Christians and Muslims have co-existed in Egypt for as many years as the Church has existed in that country.

The Patriarch later adorned Governor Fashola with the Lion of Alexandria Medal.

Others present at the occasion included, the Commissioner for Information and Strategy, Mr. Lateef Ibirogba and his Home Affairs and Culture counterpart, Mr. Oyinlomo Danmole, among other members of the State Executive Council, while in the entourage of the Patriarch were more than ten clergymen including the representative of the Church in Nigeria, His Eminence, Archbishop Alexander of the Metropolitan Arch Diocese of Nigeria as well as other top government functionaries.