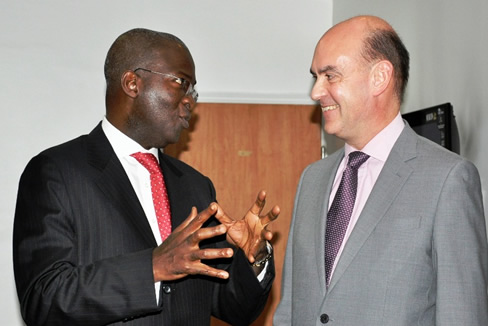 Lagos State Governor, Mr Babatunde Fashola (SAN) on Monday received the British Deputy High Commissioner to Nigeria, Mr Peter West in audience, with the discussions on facilitating an improvement in relations and opportunities between Lagos and the United Kingdom taking the lead.

Speaking at his Lagos House, Ikeja office, Governor Fashola said by mutual cooperation with organizations both governmental, non- governmental or commercial concerns of British origin, the State Government can facilitate the treatment of business permits, developmental approvals, trade permits and all allied activities that generally add to or detract from the service delivery capacities of those agencies clearly.

He reiterated that what he expects is a consolidation of the relationship that Lagos State has had with British institutions, both governmental and non-governmental as well as business organizations who do business in Nigeria.

Governor Fashola explained that over the last few months, the Lagos administration has focused on how to improve the doing of business in Lagos index in terms of how the service agencies can be much more responsive and proactive to the needs of citizens.

“We take members of the Diplomatic Community as our citizens because we are responsible for them in no small measure not only for their security and also that of their staff but also for the protection and management and environmental support for their real estate and so many other things that they depend on the municipal government to provide”.

“I like to say we have had a wonderful relationship with British institutions, we think we can improve on that relationship especially with a Deputy High Commissioner who is not coming from outside Nigeria but within. You can be assured of the very long arm of support that you will get from me and all members of my team”, the Governor stated.

Governor Fashola noted that the administration has benefitted from its relationship with agencies like the DFID, Justice for All, saying the interaction are as diverse as anyone cares to imagine and called for a continuation of the bi-annual breakfast meetings usually held in the residence of the Deputy High Commissioner.

Governor Fashola said such meetings have been very productive and useful because it allows things to be dealt with in an eyeball to eyeball basis and in a much more formal and sometimes informal basis where there is no need to write letters or make phone calls since the notes are taken across tables and vital follow ups done.

The Governor added that governments and Continents need one another now more than they have ever done before and the benefits of the African Continents will certainly be of benefit to the European Continent.

“We are challenged now to respond to the needs of our people in a much more changing and complex world than we are prepared to deal with. By this partnership, we would be able to deal with the challenges that we face in a way that is beneficial to both countries and people”.

He also expressed happiness that quite a number of British nationals chose Lagos State as their homes, saying government wants them to continue to feel welcome as their well being is a matter of high priority and concern for the Nigerian Government as that of Nigerians in the United Kingdom have been.

Speaking earlier, the British Deputy High Commissioner, Mr Peter West who said he understands the importance of Lagos in terms of its being an economic driver for the country added that over the period of his stay, he looks forward to strengthening the relationship which his predecessor has worked on.

He also recalled that last year when the British Prime Minister visited Lagos State, one of his key messages was to build a mutual prosperity agenda to progress on reform and economic development.

“I think one of the things I will like to hear your views about is how the British government can improve the relationship we have with Lagos State at the political, developmental and commercial level”.

Mr West said though he is new in Lagos, he has been in Abuja for three years and so does not consider himself as being new to Lagos while expressing delight at being granted the privilege of meeting the Governor despite his tight schedule.

The Governor was joined by members of the State Executive Council including the Commissioners for Information and Strategy, Mr Lateef Ibirogba, Works and Infrastructure, Dr Obafemi Hamzat, Education, Mrs Olayinka Oladunjoye and Energy and Mineral Resources, Engineer Taofik Tijani respectively.