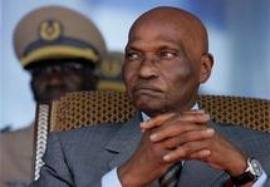 At a time when the world is beset by a serious economic crisis and nations crave younger leadership to man the affairs of state, Senegal is turning the downhill direction, putting its hopes on a weary, senile gerontocrat, the 86-year-old Abdoulaye Wade. This has happened not by democratic choice, but by the hijack of the state apparatus and the manipulation of the constitution by this old and power hungry leader.

An election is scheduled for 26 February. But the result is already scripted, with the opposition weakened and beaten. The old man would win the plural votes required for another seven year term, a third term in office. The opposition has been enraged by this sit-tight antics of their leader, calling street protests, launching their own Arab Spring, but their voices have been muffled, their protests crushed by the police.It is not yet spring in Dakar, the Senegalese should brace up for a long summer and winter of discontent.

Senegal’s Abdoulaye Wade, a former opposition leader, became president on the fools’ day of 1 April, 2000, succeeding Abdou Diouf. True to the spirit of the day of his inauguration, Wade has been dribbling his people, giving promises and breaking them, promising not to run and changing his mind to run, later. His administration has not brought the best of times to his nation, with accusations of corruption, nepotism and breaches of fundamental rights prevalent. One major corruption scandal a few years ago was a ‘gift’ of $200,000 that he gave a team of International Monetary Fund officials, in the country for a visit.

Yet another scandal was his insistence that he is entitled to 35 per cent of the proceeds from tourists who come to see the 170 foot bronze statue (the African Renaissance Monument), that his government erected in Dakar, at $20 million. Wade said the monument built by the North Koreans, was his intellectual property and that the Senegalese must give him a share of the profit of what it generates!

And in the run up to the 26 February poll, Wade had also ensured that some strong opposition candidates, such as the musician,Youssou Ndour, were excluded from the race.

Born on 29 May 1926, if not much earlier, Wade, a lawyer and an academic,a survivor of several political tribulations, including imprisonment and trials, is Africa’s oldest ruler after Robert Mugabe. Wade had been the leader and secretary of his political party, Senegalese Democratic Party, since 1974. He ran for presidency four times, once against, Senegal’s founding father, Leopold Sedhar Senghor and thrice against Senghor’s successor, Diouf. He was elected in 2000, in a rerun against Diouf, after the first election had ended inconclusive.

He almost did not win the 2000 race as he got only 31 per cent in the first poll, behind Diouf, who did not win an outright majority. In the rerun, the opposition ganged up against Diouf and gave Wade the majority he needed to clinch the presidency: 58.49% of the vote. His victory came at a price: he appointed Moustapha Niasse, one of the candidates that stepped down for him as his Prime Minister.

A year after he took over the reins of power, Senegal adopted a new constitution, reducing presidential terms to five years, from seven years. In 2007, Wade ended his first term of seven years and ran for election under the new term of five years. His victory was hotly disputed by his rivals. But this did not stop him from organising a jamboree inauguration at the Leopold Sedar Senghor Stadium in Dakar.

The 2007 election and the parliamentary election of same year which the opposition boycotted appeared to have drawn a big gulf between him and the opposition, to the extent that he declared in a newspaper interview: “Let them do what they want, it doesn’t bother me,” he said of the opposition, “so long as they respect law and order.” A year after, the Senegalese National Assembly tinkered with the tenure rules, by decreeing a 7-year term, like it was before.

Wade who had promised in the heat of the acrimony over the 2007 election that he would not contest again, changed his mind in 2009 that he would stand for election in 2012.

He had kept his word and he is a candidate for the 26 February election!

The opposition is bewildered that Wade had manipulated the country’s law for his own self-aggrandisement and that he wants to stay in power for another seven years.

In recent weeks, Dakar has been rocked by protests by supporters of the opposition and with the state police always ready to crush the revolt, with tear gas and live bullets, the protests are weakening.

What remains inscrutable is what an 86 year old man, who should be getting ready to join the spirits and ghosts, wants in power. It remains an African conundrum and speaks volume about our democratic credentials as Africans.

Wade is not alone in Africa, as a greedy power seeker.

Robert Mugabe, the ex-freedom fighter who helped to liberate Zimbabwe in 1980 from the white overlords is the ugliest face of this old breed of African leaders. He was 88 years old on 21 February and has been in charge of Zimbabwe for the past 32 years. With twelve years left to clock a century, the old man, who ought to be preparing to enter his grave, is not even thinking of stepping down: he still wants to run for another term.

Paul Biya of Cameroon is another face of the gerontocratic club: He succeeded Ahmadu Ahidjo 30 years ago as the President of the bilingual nation east of Nigeria.He is also not tired yet.

Yoweri Kaguta Museveni, the 68 year-old ex-guerrilla warrior who shot his way to power on 26 January 1986, in Uganda is also a member of the long reigning African leaders. Museveni went into the bush to fight Uganda’s past leaders, such as Milton Obote, only for him to take power and virtually crown himself King Museveni. He had changed Uganda’s constitution to legitimise his long stay in power.

Teodoro Obiang Nguema of Equatorial Guinea (33), who runs the oil rich Island as a family estate Jose Santos of Angola (33), Blaise Compaore of Burkina Faso (25) are the other notable members: the faces of leadership showing that Africa has a long way to go.