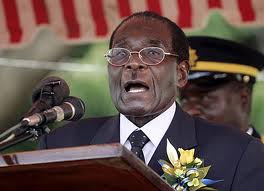 President Robert Mugabe on Saturday told British Prime Minister David Cameron “to hell with you” over his calls to respect gay rights.”Nature is nature. It has created male and female,” Mugabe told thousands of supporters at his 88th birthday celebration at a stadium in the eastern border town of Mutare.

“You David Cameron, are you suggesting that you don’t know that or is it some kind of insanity or part of the culture of Europeans.”In their newspapers, that’s one of my sins. That I called (gays) worse than pigs and dogs because pigs know there are males and females. It’s even in the Bible that you create through the system of marrying.

“That’s how we were born, so we reject that outright and say to hell with you. I won’t even call him a dog because my own dog will complain and say, but what have I done.

.”Cameron said at the Commonwealth summit last year that countries receiving British aid should respect human rights, including gay rights.The issue has re-emerged as Zimbabwe drafts a new constitution, with debate on whether to follow neighbouring South Africa’s model and include gay rights in the charter.

Mugabe urged youths to reject any provision for gay rights in the new charter.”We won’t accept that,” he said. “There are other countries who have accepted that and put it in their constitutions.””Please, young men and women, you don’t have the freedom for men to marry men and women to marry women. You have the freedom for men to marry women. That’s God’s freedom. That’s what created you and me.”Mugabe has for decades ranted against homosexuality.His latest attack came as UN Secretary General Ban Ki-moon repeated his calls for African countries to respect gay rights, during a visit to Zambia.