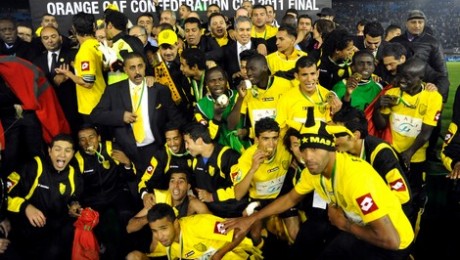 It was another shock outcome to a CAF competition when Moroccan club Maghreb Fes lifted the African Super Cup on Saturday.

Only twice in 19 previous one-off matches between the winners of the annual CAF club competitions have the Champions League holders failed to raise the trophy and collect the winners’ cheque.

The reasons for this include the Champions League being much tougher to win as it attracts the best clubs on the continent, and the winners of the premier competition having enjoyed home advantage in the Super Cup for the past 16 years.

Victory for Moghreb continued a trend of CAF shocks with long-shots Zambia edging heavily favoured Ivory Coast on penalties in Libreville two weeks ago to win the Africa Cup of Nations for the first time.

And a Gabon side considered the weakest of the eight contesting the first CAF under-23 championship in Morocco last December came out on top by defeating the hosts in the final.

Esperance had one penalty saved and blazed another over in the shootout while Moghreb converted four of five with the other saved at the 60,000-seat November 7 national stadium in Tunis suburb Rades.

Hamza Abourazzouk put the Moroccans ahead after 20 minutes by latching on to a low Hamza Hajji cross, bursting into the penalty area and scoring with a shot that went in off the far post.

Combative Esperance midfielder Mejdi Traoui was red carded during the second half after two bookings and his 10 team-mates salvaged a draw 10 minutes into stoppage time through defender Khalil Chammam.

Sameh Derbali and Walid Hicheri did not score for the ‘Blood and Gold’ in the shootout, allowing Moghreb to become only the second Moroccan club to collect the Super Cup after 2000 winners Raja Casablanca.

Egyptian sides have dominated the annual match with Al Ahly winning four titles and Zamalek three while Etoile Sahel of Tunisia, Enyimba of Nigeria and TP Mazembe of the Democratic Republic of Congo have had two successes each.

An Esperance team under new Swiss coach Michel Decastel and without Sion-bound playmaker Oussama ‘Picasso’ Darragi start their defence of the Champions League next month against US Ouakam of Senegal or Brikama United of Gambia.