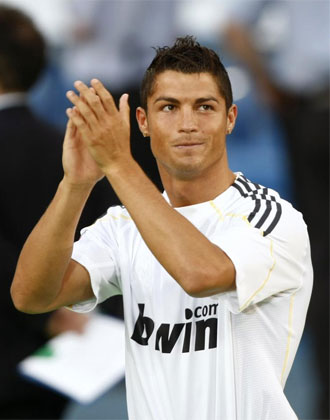 Cristiano Ronaldo scored a wonderful backheeled goal to give Real Madrid a 1-0 win over neighbours Rayo Vallecano on Sunday to extend their lead to 13 points over Barcelona at the top of La Liga.

The second half was eight minutes old when the Rayo defence failed to clear a corner at the first attempt.Portuguese superstar Ronaldo, facing away from the goal, then backheeled the ball so powerfully from 15 yards out that it evaded at least four Rayo defenders on its way into the left hand corner of the net.It was his 29th league goal of the season.

Barcelona cut Real’s lead back to 10 points later Sunday after they beat Atletico Madrid, 2-1, courtesy of a Lionel Messi free kick, 10 minutes to the end of time.

Dani Alves opened the scoring on 36 minutes but Radamel Falcao levelled the scores at the beginning of the second-half for the home team.

The Real Madrid game was competitive throughout and the main talking point of a goalless first period was whether or not Madrid’s Sergio Ramos had intentionally used an elbow to stop Diego Costa in the penalty area after already receiving a yellow card.

Ronaldo had shot dangerously on 24 minutes across the Rayo goal from the left hand side of the penalty area and a minute later he went close again with a right footed shot that narrowly missed the target.Rayo chased, harried and reduced space all over the pitch and were close to taking a first half lead when Francisco Medina burst into the area and cracked a shot onto the underside of the crossbar on 38 minutes.

The second half started in much the same vein until Ronaldo’s moment of magic in the 53rd minute.Rayo’s best chance to level the game fell to Miguel Perez ‘Michu’, who blazed the ball over the bar after a mistake from Ramos put him clear on goal.On 75 minutes Real goalkeeper Iker Casillas had to be at full stretch to stop a powerful drive from Daniel Armenteros.

Michu was unjustly sent-off with a minute remaining for a challenge on Sami Khedira in which he did not appear to make any contact.

Earlier on Sunday Athletic Bilbao enhanced their Champions League prospects with a hard fought 2-2 draw at Villarreal.Veteran midfielder Marcos Senna opened the scoring for Villarreal with a sweetly struck free-kick after 10 minutes, but Bilbao struck back with two second-half goals by Markel Susaeta and Spanish international Fernando Llorente on 61 and 65 minutes.The home team snatched a crucial point with a Nilmar goal two minutes later to move three points away from the relegation zone.Bilbao stay fifth, one point behind Levante who currently hold fourth position and a Champions League classification for next season.