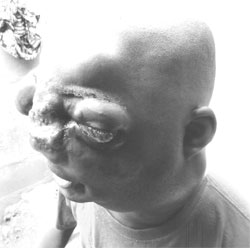 The family of Hakeem Balogun has appealed to the government and well-meaning Nigerians to come to their aid and save their son from untimely death.

Hakeem was said to have suffered from a minor sickness which degenerated into cancer of the eye.

He was being treated at a private hospital in Surulere where it was confirmed that he has eye cancer.

But the young man’s future has become bleak as he currently needs approximately N6.5 million to undergo surgery abroad.

The family appealed to well-meaning Nigerians to send their contributions to an Fidelity Bank account number 6018683915 with the name Adisa O. Kuti.