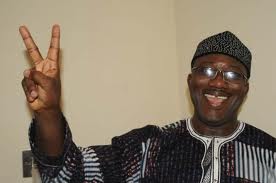 The Lagos State chapter of the Action Congress of Nigeria, ACN, has congratulated the Ekiti State Governor, Dr. Kayode Fayemi on his recent victory at the retrial tribunal set up to review the case that brought him to power in October 2010.

The party berated Mr. Segun Oni, the sacked governor of Ekiti State for attempting to drag the judiciary in the mud with his ill-advised attempt to muddle the judiciary to satisfy the greed that led him to steal the mandate of Fayemi, in the first instance.

In a release in Lagos, signed by the Lagos State Publicity Secretary of ACN, Joe Igbokwe, the party salutes the courage demonstrated by the review panel by its refusal to resurrect a settled and thoroughly exhausted case just because Oni felt he would not have been divested of the stolen mandate he was wielding illegally in the first instance.

The party feels that time has come to punish perpetrators of electoral fraud with stiff sanctions and jail terms because of the far-reaching negative implications of such acts.

“We are still baffled that our system has not seen the need to prosecute those that organize, supervise and commit election treason, employ same to corner mandates belonging to other people. We are surprised that even when such treasonable acts have been found out and legally proven, as is the case of Oni, these people are allowed to go scot free to, not only continue infesting the entire space with their negative values but also try to ridicule the judiciary, as Oni did. We are surprised that our legal and electoral systems make provisions for such debasing actions as seeking to turn the nation’s judiciary to a comic show where cases are reversed at will without convincing and compelling reasons,” the party said

ACN further stated: “We want to salute the panel that heard Oni’s puerile case for the way and manner it disposed of this useless case, we want to commend the quick way this case was disposed of and we wish to salute the members of the panel for refusing to indulge in Oni’s ride of fancy, for that is what his case is. We charge Oni to live with the fact that he can only access power through the approval of the people and not through such dubious short cuts as he did when he stole Dr. Fayemi’s mandate. We ask him to learn to live with the fact that there is no more mandate to steal and that will help his rehabilitation effort than wallowing in the dubiety of manufacturing and concocting lies and inanities to build a worthless case.

“While we congratulate His Excellency, Governor Kayode Fayemi for this latest victory, we charge him to remain focused and undaunted as he is trying to right the many years of misgovernance in Ekiti. We demand that his political opponents desist from constituting meaningless distractions on his path.”