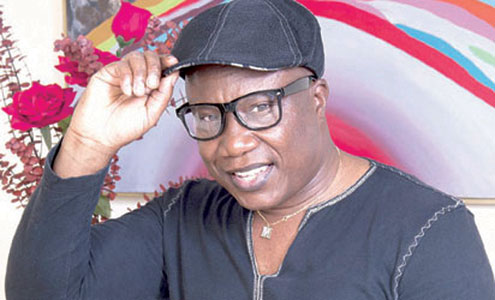 At the fun-filled show, Okri, who is holidaying in Nigeria from his United States base, raised the adrenaline level of the revellers when he mounted the stage. He played different chart-topping and popular songs like Omoge, Rumba Dance, Time Na Money’ rendered in his characteristic style which sent the ladies asking for more. The tempo of the event was sustained by the hilarious and rib-cracking comedians, Funny bone and I Go Dye.

The icing on the cake was when J. Martins mounted the stage and rendered tracks like Good or Bad, Oyoyo, Swagger Dance, Cool Temper and the like.

Prior to that, the Shifters band set off the night with a glowing tribute to the late R&B and soul music diva, Whitney Houston with the rendition of her chart buster I Will Always Love You.

Funso Ayeni, Brand Manager, Legend Extra Stout, stated that the relevance of the Legend Nite is to create an atmosphere where the brand bonds with its consumers and to make them understand the brand essence. He added that the nite which started in March 2011, would also be spreading its tentacles to Benin, Port-Harcourt and Abuja in the coming months.

During the night, some consumers were rewarded with gift items ranging from refrigerators, DVD players, generating sets, standing fans and other fantastic gift items. Lucky winners include Mr Mayor Akinpelu, publisher of Global Excellence and Mr. Tokunbo Olajide, a journalist with TheNEWS magazine who went home with a DVD player.

The monthly live music and in-bar all night activation that rewards loyal consumers of Legend Extra Stout, comes up every last Friday of each month at the Niteshift Coliseum. It is sponsored by the Nigerian Breweries plc.