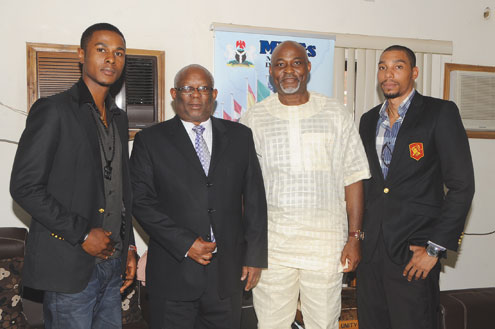 Richard Mofe Damijo, ace Nollywood actor and Delta State Commissioner for Culture and Tourism has applauded the efforts of Kevin Durst and Fejiro Ejogbamu, two Champions that emerged from the recently concluded Gulder Ultimate Search 8. He made the remarks when Messrs Durst and Ejogbamu, accompanied by other GUS 8 Champions, paid a courtesy visit to the Delta State government house.

Speaking at the receptions, RMD told the champions that their participations at the search were just a stepping stone towards more successes in life. He noted that the good thing about compete with other people and got selected is that it imposes more work the lucky champion. He said Delta State is synonymous with winning in competitions, hence the sterling performances by Durst and Ejogbamu.

The other GUS 8 Champions are: Christopher Okagbue, the winner, Anastasia Azike, the last female contestant standing, Anthony Igwe, Tony Horsfall, Promise Ojiegbe, Sunday Gyang, Olanrewaju Alawoki and Patience Ihongbe. The 10 Champions are currently on a tour which will take them to the states of origin of the contestants. They have earlier toured Oyo and Edo States.