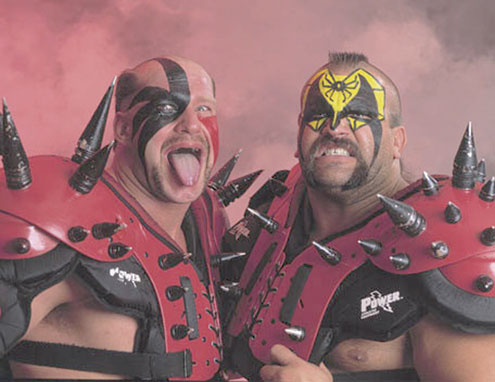 On the most recent edition of WWE Monday Night Raw, there was a triple threat match between the WWE World Tag Team Champions, Epico and Primo, the team of Kofi Kingston and R-Truth and Vicky Guerrero’s combination of Dolph Ziggler and Jack Swagger.

The match was a sad reminder of what the tag team scene in the WWE used to look like. With that in mind, here is a look at the Top 10 tag teams in professional wrestling history.

They started out as the Legion of Doom in the AWA and became the Road Warriors in the NWA. They then went on to wrestle in the WWE and Japan. Hawk and Animal were the most dominant tag team to ever step into a wrestling ring and were winners every step of the way.

There were a couple of iterations of The Midnight Express that were very successful, the first Loverboy Dennis Condrey and Beautiful Bobby Eaton and the second as Eaton and Sweet Stan Lane. The pairing of Eaton and Lane were the best, one of the best technical tag teams to ever wrestle in the sport. They never made their mark in the WWE but owned the NWA.

In the NWA, Tully Blanchard and Arn Anderson were members of the Four Horsemen and held the NWA Tag Team Championship twice. In the WWE, they were known as the Brain Busters and held the tag titles there once. In both places, they were the crème of the crop, no gimmicks, just the best tag team wrestling in the world at the time.

Rick Steiner had experience as a tag team wrestler before his brother entered the sport. However, when Scott Steiner showed up and joined his brother, they became one of the most successful tag teams of the ‘90s. Forget about the Scott Steiner you see now. At their height, it was Rick as the ground-and-pound wrestler and Scott as the high flier. They won belts in WCW and the WWE.

Bubba Ray and Devon Dudley held 23 tag team championships over their career. They held the main tag belts in ECW, WCW, WWE, NWA, TNA and the IWGP in Japan. While they are no longer together, their legacy lives on in TNA.

While the Dudley Boyz held the most title gold, one of their biggest rivals of the Attitude Era was Edge & Christian, a team that some might argue was better. The duo were seven time WWE tag team champions and were easily the most well-rounded tag team of the era.

If asked years ago, the Hardy Boyz might have ranked higher on the list, but in hindsight, it was clear they were not as technically sound as Edge and Christian nor as successful as the Dudley Boyz. However, the Hardy’s were the most popular tag team in the world, during a time when that meant something.

Every good guy, baby face tag team in the world today pattern themselves after Ricky Morton and Robert Gibson. The Rock and Roll Express perfected how to get over as a face tag team in the NWA and everyone from the Fantastics to The Rockers to the Motor City Machine Guns owe their careers to Ricky and Robert.

The iteration of the Hart Foundation I list here is Bret “The Hit-Man” Hart and Jim “The Anvil” Neidhart. With Jimmy Hart at their side, they ruled the WWE, better than their rivals, the British Bulldogs, in every way.

There has not been a lot to be excited about in tag team wrestling over the last few years. However, TNA provides fans with above average tag team wrestling. A couple of years ago, they had the best tag teams in the world competing for them and Beer Money was the best of the best. James Storm and Robert Roode was the closest we have come to the Midnight Express since the early ‘90s.