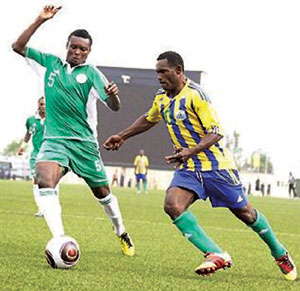 •Nigeria's Godfrey Oboabona (left) battles for the ball with Rwandan striker, Bokota Labama during their Nations Cup qualifier in Kigali yesterday. The game ended in a goalless draw.

Super Eagles skipper, Joseph Yobo, has predicted a tough time for the national team when they file out against the Amavubi of Rwanda in the second leg of the 2013 Africa Cup of Nations qualifier slated for June at the National Stadium, Abuja.

The Eagles, who missed the last Nations Cup, refused to fly yesterday as they struggled to play a goalless draw in a tension-soaked match against Rwanda at the Stade de Regionale in Kigali.

Speaking early today on their game in Kigali, the Fenerbahce of Turkey defender said the Rwandans will try the utmost to make the second leg in Abuja difficult for the Nigerian side.

“The return leg in Abuja will be very tough for us because of the outcome of Wednesday’s match. We were lucky to escape defeat in Rwanda and I know that they will want to make the second leg difficult for us,” said Yobo, who set a new Nigerian record for international appearances when he won his 87th cap in Kigali.

On his part, Blackburn striker, Yakubu Aiyegbeni said that the entire players were disappointed with the outcome of the match, adding that the players had no excuse for the draw in Kigali.

“We are disappointed with our performance yesterday. In fact, we have no excuse for not winning the match. The weather was good and nothing hindered our game. But the fact is that we did not play well and you can’t win a match if your perfomance is not good enough,” Aiyegbeni said.

Meanwhile, the former scribe of the Nigeria Football Association, NFA, Sanni Torro, has appealed to sports-loving Nigerians to give the Eagles’ coach, Stephen Keshi, more time to prove himself.

“I want Nigerians to support Keshi and give him more time to prove himself. I have no doubt that he will deliver considering the fact that he has coached two national teams before taking the Super Eagles’ job.

“Nigerians had been clamouring for the inclusion of the home-based players in the Super Eagles and Keshi fielded four of them yesterday. I advise Nigerians to give him more time because he will build a new team for the country,” said Torro.