Nigeria: War in The North, War In The South! 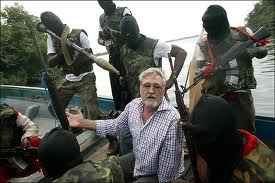 Emeka Odumegwu Ojukwu, the man who declared Biafran secession in 1967 and triggered Nigeria’s first civil war was interred Friday in his home town of Nnewi in Eastern Nigeria, amidst an outpouring of tributes from prominent Nigerians, including former Ghanaian leader, Jerry Rawlings. The two-week long burial ceremony was grand and stately in all respects.

Ojukwu must have had a fitting last laugh on the country that once fought him and his people fiercely and ruthlessly, aborting his new country. Forty two years after the end of the war and after memories had been forged through the mill of amnesia, Ojukwu, in his final passage, was no more a rebel or a villain. He had been transformed a war hero, a national hero and statesman as he was interred in a blaze of national pomp and pageantry.

With the curtains drawn over the shadows and ghosts of the nation’s first rebellion, comes the resurgence of current nightmares: the insurgency in the Niger Delta and the tenacity of the Boko Haram militants north of the Niger. The Nigerian leadership and security apparrati may be suffering from self denial, what the naked eye can see is that our country is in a state of war: war in the north, war in the south!

Almost every day, the Boko Haram militants strike at targets, one deadly step ahead of the security men, even in local councils where a state of emergency has been declared. If the militants are not entering the markets to spray traders with bullets, they are laying ambush for soldiers and policemen of the Joint Task Force; burning schools, attacking and bombing churches, throwing improvised bombs, assaulting prisons, police stations and dynamiting their ways into bank vaults, to steal tons of money to fund their insurgency.

The latest news from the wires is that thousands of foreigners living in the insurgence-prone areas have fled our country. Niger said it has registered thousands of returnees from Nigeria and Chad has also reported the return of its citizens.

This is how, Reuters reported the emigration:

”Hundreds of Chadians, including many children without their parents, who have fled clashes in northern Nigeria between troops and a militant Islamic sect need shelter, food, water and medical assistance, the International Organisation for Migration (IOM) said on Wednesday.

“Some had to walk for seven days to reach the Chadian border, so they are exhausted, dehydrated and hungry,” said Qasim Sufi, the IOM’s chief of mission in Chad.

”The nearly 1,000 returnees from Nigeria, who have settled in makeshift huts in the Chadian village of Ngouboua, are surviving on food given to them by locals who do not have enough themselves. Ngouboua, 30km from the Nigerian border in Chad’s Lac region, has been experiencing food shortages like other areas of West Africa’s semi-arid Sahel region, according to Sufi.

“This (returnee situation) is a new and acute emergency, a problem on top of an existing problem,” Sufi said on the phone from N’Djamena.

Although, Nigeria’s immigration authorities said they have also evicted foreigners from the country, both the voluntary emigration and the eviction suggest some level of crisis, no longer concealable.

And no where is there a mounting concern about insurgency than in the Niger Delta, south of Nigeria, where the problems of deep sea piracy, murderous attacks of security personnel and sabotage of oil installations and kidnapping of oil workers threaten once again to jack up international oil prices, disrupt oil exploration, and make maritime business unsafe.

MEND, the militant group responsible for the attacks in the region had been on a recess, with the implementation of an amnesty and disarmament programmes in the region and the arrest and trial of some of its leaders, such as the Okah brothers. But MEND recently declared a resumption of hostilities, with an attack on Agip oil facility.

As if that was not enough, MEND announced Friday that it has in its custody, the captain of a Dutch cargo ship, the chief engineer and a crew member that the pirates had seized a few days ago, after injuring the crew member.

MEND said in a statement Friday that the three men, two Russians and a Filipino are in good health. “The kidnappers have offered to hand these sailors — who are all in good health — over to one of our camps in Rivers State,” said MEND, which also added that it is receiving the captives because they were not captured in a vessel doing business with Nigeria’s oil industry.

By the announcement, MEND is suggesting that its men are working in collaboration with the pirates, afterall, the long term impact of the piracy correlates with the goal of MEND: to make Nigerian waters and the Gulf of Guinea a dangerous zone, unsafe for cargo ships and the oil tankers and to make oil exploration unattractive.

And the strategy is working: As Radio Netherlands reported: ”Somalia may have the reputation as the world’s centre for maritime piracy, but an umbrella group of insurers have designated the coastal waters of Nigeria and Benin as a danger zone – the same category as Somali water ”.

As reported by the International Maritime Bureau, piracy is on the increase in the Nigerian waters. Noel Choong, head of the IMB’s Kuala Lumpur-based piracy reporting centre said seven attacks have been recorded in Nigeria this year and one in the waters of Benin Republic.

A group of about eight pirates armed with guns carried out the attack on the ship, which had a crew of 14. Two weeks ago, pirates fired on a cargo vessel off Nigeria, killing the ship’s captain, according to the IMB.

Choong said that vessel’s chief engineer died from a fall during the attack, correcting earlier reports that he also had been shot dead.That ship was Panamanian-flagged but its owners were Taiwanese, he said.

“The attacks off the Nigerian coast are very violent and they are increasing,” Choong said.

With MEND’s ringing warning early last month to oil ships that its militants would attack them, with rockets and burn them, who says that our country is not yet in the throes of war, north and south?

.Bayo Onanuga is the Editor-In-Chief of P.M.NEWS and THENEWS Magazine