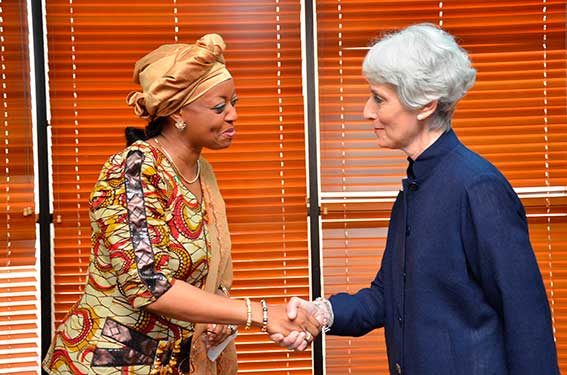 The material which includes about 4,000 cartoons of table water arrived the Yenagoa water front over the weekend for onward distribution to the affected communities of – Koluama 1, Koluama 11, Ekeni, Foropa, Fishtown, Ezetu 1, Ezetu 11 and Sanga, all in the Southern Ijaw and Brass Local Government Areas of Bayelsa State.

Before now the Minister through the NNPC had despatched bags of rice, beans, antiseptic soaps, toiletries, cloths vegetable oil and dairy products to the communities.

Christopher Tuodo, Chairman of the Keffes Rural Development Foundation who received the items on behalf of the eight communities under the Keffes umbrella thanked the Minister for living up to an earlier promise during her visit to the communities few weeks ago.

On January, 16, 2012, a fire outbreak erupted after an explosion from a new gas well head at Funawa 5 gas platform along the Kolu-Ama River in Southern Ijaw Local Government Area of Bayelsa State on the Drilling Rig KS located in shallow water approximately 10 km off the coast of Nigeria.

The resultant gas fire which has since diminished to a marginal level brought to the fore the perennial challenge of environmental pollution and degradation in the oil bearing region.

Also, a two- day National Refineries Workshop convened at the instance Mrs. Dieziani Allison Madueke, the Petroleum Minister to seek integrated solution to the challenges confronting the nation’s traditional refineries got underway on Monday in Abuja.

The Day-1 of the session which had in attendance all the downstream stakeholders within the NNPC Group as well as officials of the Ministry of Petroleum Resources is seeking to galvanize all options in the drive to increasing the nation’s refining capacity through the rehabilitation and upgrade of existing refineries. The workshop comes to a close on Tuesday with participation expected from all major interest groups as well as trade unions in the downstream sector of the Petroleum industry.

Also, the United States Government on Monday expressed confidence in the Nigeria oil and gas industry under the stewardship of the Minister of Petroleum Resources, Mrs. Diezani Alison-Madueke.
The Minister had in the last two months established specialized task forces/ committees in the Petroleum industry saddled with the mandates of fast tracking ongoing oil sector reforms and providing value addition in Federal Government’s drive to ensure that Nigeria reaps bountifully from the proceeds of God-given hydrocarbon resources.

Speaking at the end of a breakfast session with the Minister of Petroleum Resources at the NNPC Towers in Abuja, the US Under Secretary of State for Political Affairs, Ambassador, Wendy Sherman while describing Alison-Madueke as a visionary leader stated that the United States will continue its partnership with Nigeria in the oil sector as well as other areas of common interest.
“We had an excellent meeting with the Minister, she is a visionary who is looking ahead to a sector that will bring great benefit to the people of Nigeria and I know she is working very closely with the Nigerian President to ensure very bright future for all Nigerians,’’ Ambassador Sherman stated.
The US Under Secretary who was accompanied to the meeting by the Special Envoy for International Energy Affairs, Carlos Pascual and the US Ambassador to Nigeria, Terence Mc Culley, pledged continuation of the US/Nigeria bilateral trade relationship .
“The United States looks forward to continuing with a strong partnership both here in Nigeria, in the region and throughout the world,’’ she said.
Welcoming the US delegation, Mrs. Alison-Madueke described the US as a worthy partner in the oil and gas industry noting that the Federal Government is determined to sustain the relationship