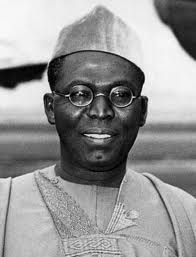 Eminent personalities from all walks of life on Tuesday gathered at the residence of the late Chief Obafemi Awolowo in Ikenne-Remo, Ogun, to celebrate his 25th posthumous birthday.

The celebration, which has been made an annual event, was also used to commemorate his 103 birthday.

The anniversary, which was opened with Holy Communion, was presided over by Venerable Folusho Babatunji.   Babatunji described the late sage as a courageous and trustworthy leader, who contributed immensely to the development of the country. He urged politicians to emulate his virtues.

The wife of the late sage, H.I.D Awolowo, described her deceased husband as a loving, caring and affectionate partner.   She maintained that the late sage would continue to be remembered for his uprightness.

“He was a highly disciplined man for, which we thank God; and he was very determined and he had a focus and a vision and he kept strictly to it throughout his life. I will say maybe one in a million; you don’t come across such a human being.   “He was completely selfless and he regarded others more important than himself.“

In his remarks, Mrs Ayotola Ayodeji, a grand-child, described the late sage as a great leader and a wonderful grandfather.   She said her grandfather’s affection and love for family would be greatly missed.     “Baba was a great leader during his life time and his birthday was considered as a cheered celebration. We celebrated him while he was alive, why won’t celebrate him now that he gone.   “He was indeed a loving grandfather and we will continue to celebrate him.”

Mrs Patience Ogbogbo, the Deputy National President of Ijaw Women Leadership Forum in her contribution, said the Ijaws would continue to identify with the Awolowo family as they were beneficiaries of the late sage’s free education policy.   The woman leader described Awolowo as a great leader who worked for the unity of the country.