We Have No Nation Yet, Says Tinubu 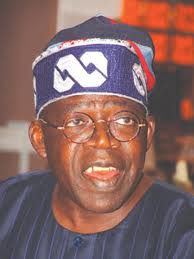 In the wake of election malpractices and irregularities in the country, former governor of Lagos State and leader of the Action Congress of Nigeria (ACN), Bola Ahmed Tinubu, has opined that Nigeria is not yet a nation.

Speaking at the 84th birthday and book launch of former governor, Old Western Region, General Robert Adeyinka Adebayo in Lagos yesterday, Tinubu reiterated that until Nigeria reaches that stage where one man, one vote is entrenched, it cannot be regarded as a nation.

Tinubu noted that it calls for concern that Nigeria is still fighting poverty in the midst of plenty.

He said there is urgent need for electoral reforms to save the country from anarchy and chaos.

Tinubu, who was the chairman of the occasion, said having fought tirelessly for the liberation of Nigeria during his active days, Gen. Adebayo by now should be reaping the fruits of a developed nation, but it’s unfortunate that the “country is rather sliding into doldrums.”

“We are still fighting poverty in the midst of plenty. Please forgive us and don’t be ashamed of the country you worked for. Just encourage us because we have no nation yet. We would have been better if there is one man, one vote.

“We put agencies together to entrench one man, one vote, but what we are getting is one man, many ballot papers. INEC is wallowing in logistic problems. There is no database. And our electoral system is getting to a point that the more you look, the less you see. But even if the ruling party continues to short change the majority, we will not give up,” Tinubu stressed.

He added that the country’s judicial system is under siege “because the ruling party has embarked on witch-hunting of jurists, just like in the case of Justice Salami. Are we not giving the nation to dogs and inviting chaos?”

Tinubu, however, called on the celebrant, Gen. Adebayo and other concerned Nigerians to fight for the reinstatement of Justice Salami.

Speaking on the topic ‘Rebranding Nigeria Through Elections’, Professor Justus Shokefun reiterated that the most accepted election in the history of Nigeria was held in 1993, adding that even the late President Umar Musa Yar’Adua once said he was not proud of the election that brought him into office.

In his own remarks, Gen. Adebayo said: “Today is a great one for me. I’m overwhelmed. The future is more relevant than the past. I have done my best in the past and now I’m handing over to those younger, particularly those who passed through me because we want the future to be better than the past…but it appears those who are looking for positions in the future are not focused on development.”

He therefore suggested that INEC and the police should be truly independent and impartial, adding that INEC chairman and resident officers shouldn’t be appointed by the president of the country.

“There should also be a specialised court for election matters,” he concluded.

Some of the dignitaries who attended the birthday an the launch of a the book titled ‘Electoral Reforms In Nigeria’ were Chief Olusegun Osoba, General Mobolaji Johnson, Prince Tony Adejuyigbe and former Ogun State governor, Otunba Gbenga Daniel, to mention a few.