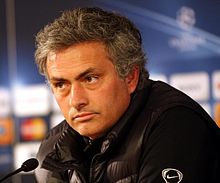 A study by website futebolfinance.com has revealed Real Madrid’s Jose Mourinho to be comfortably the world’s highest-paid coach, according to the Sportinformations agency.

The Portuguese boss, who has won the Champions League with both FC Porto and Inter Milan and is in line to win the Liga title in his second season in Madrid, is reported to earn 10 million euros ($13.1m) per year.

According to the study, he is followed by Barcelona nemesis Pep Guardiola and veteran Dutchman Guus Hiddink – now in charge of ambitious Russian club Anzhi Makhachkala – with both pocketing 7.5 million euros ($9.8 million).Both Mourinho and Guardiola are believed to be targets of free-spending Chelsea owner Roman Abramovich, who is looking for a coach after sacking Andre Villas-Boas last weekend.

The departure of Fabio Capello from the role of England manager means that Switzerland boss Ottmar Hitzfeld is now the highest-paid national coach in the world, with the study revealing his annual salary to be 2.6 million euros ($3.4m).Despite his lucrative salary – the 19th-highest on the overall list – the veteran German failed to lead his adopted country to the finals of Euro 2012 this summer in Poland and Ukraine.

The ten highest-paid coaches in the world, according to futebolfinance.com study: