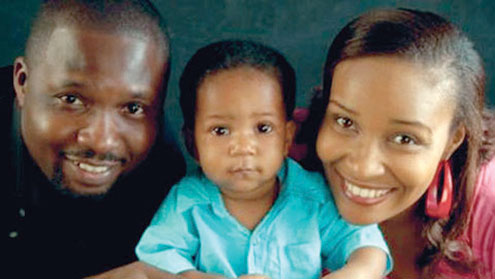 •Daniel, Doris and their child

In the wake of numerous heartbreaks and marriage break-ups that have been rocking the Nigerian entertainment industry for sometime now, the union of actress, Doris Simeon and her movie director hubby, Daniel Ademinokan, has been regarded as one of the few lucky ones. But a recent speculation suggests that the marriage may be heading for the rocks.

Penultimate weekend, an exclusive report suggesting that there is a crack in Doris’ marriage to Daniel was published in a daily newspaper, and soon after that, social network sites and the Internet was awash with the rumour.

While Daniel and the child the union produced have relocated to Abuja, Doris is still in Lagos with a busy schedule. But there are speculations that the former’s relocation to Abuja has an undertone.

Though neither Daniel nor Doris has cleared the air, they were rumoured to have parted ways due to irreconcilable differences.

“But they don’t want to make it a public issue. They have been trying so hard to keep it a secret,” a source said.

Meanwhile, when NollywoodReel called Doris on her Globacom line at about 1:36 p.m. yesterday, she declined to comment on the issue. She simply said “no comment… I won’t say anything.”

Efforts to reach her hubby, Daniel as at time of filing this report proved abortive.