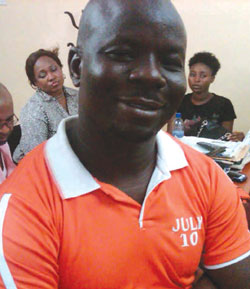 The Production Manager of AK Media Concept, Abiola Nurudeen otherwise known as Alpha, has bagged the Staff of The Year (2011) from the outfit.

He was then presented a giant deep freezer. He will also be on special allowance of N10,000 every month for the year.

Managing Director of the company, Benson Akindeju commended Alpha’s effort and promised to continue with the gesture in order to boost staff morale in the company.

Also, he assured all staff that the company will continue to see the staff’s welfare as its priority.

Some of the productions of AK Media include Family Ties, Nowhere To Be Found, Face2Face, Oyinmomo (a Yoruba talk show on DSTV) and Muziq & Moore.