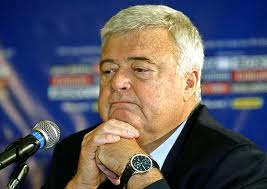 The head of the Brazilian Football Confederation (CBF) has resigned amid allegations of corruption, the confederation said Monday.

Ricardo Teixeira, who last week announced he was temporarily stepping down for health reasons, has resigned both as CBF chief and as head of Brazil’s local organizing committee for the 2014 World Cup, Jose Maria Marin, the acting CBF president, said.