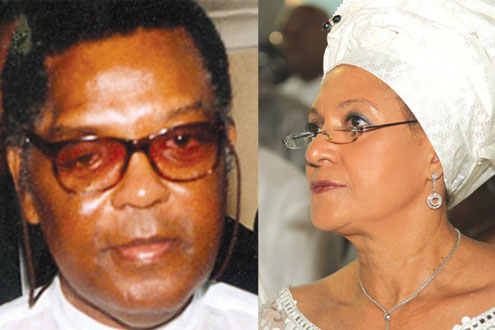 . Maiden: My Husband spoke to me today

Barely four months after the death of The Guardian Newspaper publisher, Alex Ibru, crisis has engulfed his estate as one of his companies, Onamo Investment Corporation, has filed a petition against Tourist Company of Nigeria, owners of Federal Palace Hotel, Ikoyi, Lagos.

The petition seeks to wind up the company over accumulated debt. When the matter was mentioned at the Federal High Court, Lagos this morning, a human rights lawyer, Dr. Tunji Braithwaite representing Onamo Investment Corporation, told the court that he received a letter written to the Chief Judge but the presiding judge, Justice Okechukwu Okeke said the letter was not written to the CJ but the Chief Registrar of the court.

Justice Okeke then ordered the registrar of the court to read the letter. In the letter written by elder statesman, Chief Edwin Clark, he appealed to the court to adjourn the matter to a long date for an amicable settlement of the matter.

But Braithwaite said the letter was annoying. He said that it has been agreed that the case be transferred to another judge.

The counsel to Tourist Company of Nigeria, Onyebuchi Aniako, said the court should ensure a peaceful resolution of the matter.

Barrister Kola Awodein, SAN, ‘acting as a friend of the court’ said whatever the court is doing on the matter, the counsel to both parties should be involved so that the authority of the court is not undermined.

At this juncture, wife of the late Alex Ibru, Mrs. Maiden Ibru, asked the court to give her two minutes to talk. She was given audience by the court.

Mrs. Ibru said as she was about to enter the court, she saw her late husband at the entrance of the gate who was urging her to go ahead that he is behind her.

She said sometime last year when her husband was on sick bed, doctors told him that he was going to die in August.

She added that her late husband specifically told Goodie Ibru that he was annoyed with him. He told him that he entrusted his wife, children and all his property in his care but he was worried the way Goodie was behaving when he (Alex) was still alive.

He then asked what will happen when he eventually died.

Thereafter, Mrs. Ibru asked Goodie to resign as the Chief Executive Officer of Tourist Company of Nigeria, if not, she would fight him dead or alive.

Justice Okechukwu Okeke, while disqualifying himself, said the case file be transferred to the Chief Judge of the Federal High Court for reassignment.

At the premises of the court, Mrs. Ibru said her husband was worth N6 billion.

Whereas, the case before the court is that Tourist Company of Nigeria Limited should wind up for its inability to pay $7.1 million, N610 million, N381 million and N19 million to various creditors, including Onamo Investment Corporation.