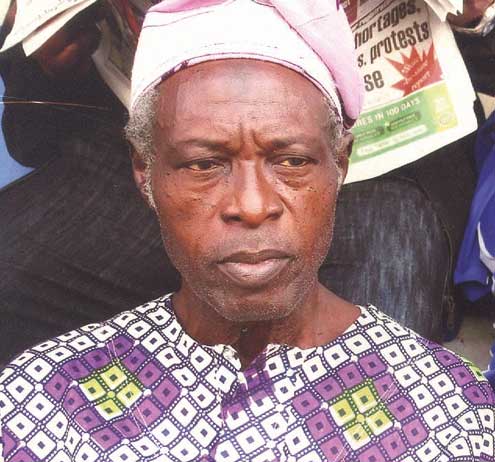 P.M.Sports gathered that the former Nigerian striker, who has been bed-ridden with stroke since February, died around 12:30pm today at the General Hospital in Gbagada, Lagos State, Nigeria. He was aged 75.

A close of friend of the former NEPA-ECN player, veteran sports journalist, Segun Adenuga, confirmed his death this afternoon.

Adenuga said the late Shittu, who was survived by two boys and a girl, battled hard to stay alive from the ailment, “but he gave up in a painful way this afternoon, just 24 hours to the day that Governor Babatunde Raji Fashola plans to fly him to Indian for further treatment.”

According to Adenuga, “We have notified the Chief of Staff to the Governor, Mr. Lanre Babalola, to inform him of the latest development. The burial is tentatively fixed for Wednesday, 14 March, 2012. It is painful that Shittu has to leave his little children and rest of us at this period,” Adenuga lamented this afternoon.

Shittu, fondly called ‘The Bulldozer’ was one of the greatest footballers that ever played for Nigeria even under the colonial masters.

Born in Jos, Plateau State in 1937, by a Yoruba parentage, Amusa Shittu began his soccer career in 1958, when he featured for Plateau and Northern Region X1.

Although he had his first call up to the national team in 1959, Amusa Shittu made his debut on 10 September, 1960, when he played in Nigeria’s 2-2 draw against Ghana in a World Cup qualifier. He scored his first international goal in Nigeria’s 4-1 victory against Port Guinea, now Guinea Bissau in October 1960.

Shittu was also renowned for scoring the only goal in an Olympic qualifier in Nigeria against Sudan on 5 November, 1967 and also scored two goals in the reverse fixture on 17 November in Khartoun to silence the vociferous Sudanese home supporters.

He was a member of the Green Eagles squad that played against the visiting German Olympic team in 1971 at Onikan Stadium, Lagos.

On the local scene, Amusa Shittu was in the team that won the F.A Cup for the Western Region in 1961 and indeed, was the first footballer to have scored an F.A Cup final goal outside the Onikan Stadium in the1961 final between his team and UAC, Broad Street Millionaires, at the Old National Stadium, the site of the present National Stadium.

Shittu’s greatest moment was in 1970 when he propelled ECN (NEPA) to their third F.A Cup glory against his former club, Highlanders of Jos.The game had ended 1-1 apiece before Shittu, a coach/player, came on to rescue his team by scoring the winning goal for ECN.

Shittu, was bed-ridden at the Gbagada General Hospital, Lagos, battling to survive the trauma of stroke that struck him on 12 February, 2012 before he finally gave up today.