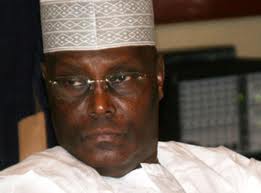 
A mild drama played out Tuesday afternoon at the Federal High Court in Abuja as a middle aged man identified as Musa Inua climbed a telecommunication mast with the intention of committing suicide over an alleged N15 million debt owed him by former Vice President, Atiku Abubakar.

The media aide to Atiku, Mallam Garba Shehu told newsmen that the man was insane saying that it was not the best way to get anything from the former Vice President.

It took the combined efforts of the Nigerian Police Force, Fire Service and the National Emergency Management Agency, NEMA, to persuade the man to come down after about three hours on the mast.

Garba profusely defended his principal and affirmed that his boss is one man that pays his bills. “We honestly suspect that this man is mental, if there is one Nigerian who pays all his bills, that man is Atiku Abubakar. if the idea of his pole climber is to get any money from the Turaki, this certainly is not the best way to go about It”.

“Left for me, I will say that the man should simply be ignored. He will climb down when he gets tired of staying up there” Garba Shehu added.

When the man’s efforts to see the Chief Judge failed, he stylishly walked to the back of back of the court where the mast was located and started his journey to the tope of the mast.

The man was discovered on top of the mast by one of the staff of the court who in turned alerted the security operatives.

When asked to come down, the man who spoke hausa fluently, insisted that he would not come down until Atiku or the Inspector General Police comes around.

After about several hours of persuading him to come down,an Assistant Commissioner of Police ACP, Sunday Odukoya, spoke to him in hausa language using a megaphone and assured him that the IG is around and that an agreement has been brought for his money to be paid.

After hours of persuation, the man finally responded to Odukoya and came down of the mast.

He was quicly driven away by the police in a Toyota Hilux van with the registration number FG 568 BO.

The FCT Police Command spokesman, Mr. Jimoh Moshood, stated that they are taking the man away for investigation over the allegation he leveled against the former Vice President.