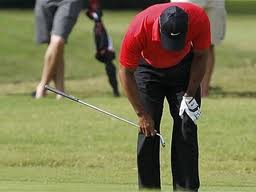 Another injury scare for Tiger Woods has the golf world wondering if the 14-time major champion will ever win again, much less challenge the all-time record of 18 major titles won by Jack Nicklaus.

Woods withdrew from the World Golf Championships event at Doral on Sunday after hitting his tee shot on the 12th hole, complaining of a tightness in his left Achilles tendon, the same one he hurt at last year’s Masters tournament.

For the fourth time in five years, Woods faces a major setback to his season, having battled through a left knee injury in 2008 to win the US Open, knee and tendon pain last year and the aftermath to his sex scandal in 2010.

The former World No. 1 has not won an official event on any tour since the Australian Masters on November 15, 2009, just before the revelations of a secret sex life that led to his divorce from ex-wife Elin Nordegren.

Woods has undergone four operations on his left knee, including reconstructive surgery after he limped through a playoff to win the 2008 US Open at Torrey Pines, his most recent major triumph.

The biggest concern about the timing of the latest health scare for Woods is that the Masters, the one major Woods has never missed since his 1995 debut there as an amateur, is now in doubt.

The first round tees off at Augusta National on April 5 and World No. 1 Rory McIlroy of Northern Ireland, the reigning US Open champion and a solid favorite at the Masters with or without Woods in the field, hopes to see Woods there.

“It’s probably just precautionary but I really hope he’s ready for the Masters,” McIlroy said on Sunday. “It’s a shame because he looked like he was coming out this year swinging it really well, playing good, getting himself into contention.

“Tiger Woods has been the face of golf for the last 15 years. Feeling like he’s coming back to his best, or something near his best, it’s great for the game. He can spark an interest in the game that no one else can.”

Woods, 36, has not missed the Masters cut as a professional and he has finished no worse than a share of sixth over the past seven years at Augusta National, where he humbled the field in 1997 to claim his first major title.

Missing another chance at a fifth green jacket would be yet another setback in Woods’ quest to break the major mark of Nicklaus, his boyhood idol.

The latest injury fear came as Woods was playing for the third week in a row and after he winced at hitting a tee shot.

“I felt tightness in my left Achilles warming up this morning and it continued to get progressively worse,” Woods said in a statement. “After hitting my tee shot at 12, I decided it was necessary to withdraw.

“In the past, I may have tried to continue to play, but this time, I decided to do what I thought was necessary.”

Woods also won his first title of any sort since the sex scandal, taking the World Challenge event last December, and earlier this month fired a final-round 62 at the Honda Classic, his best-ever PGA closing-round score.