Fashola: Future Of Africa Will Depend On Laws 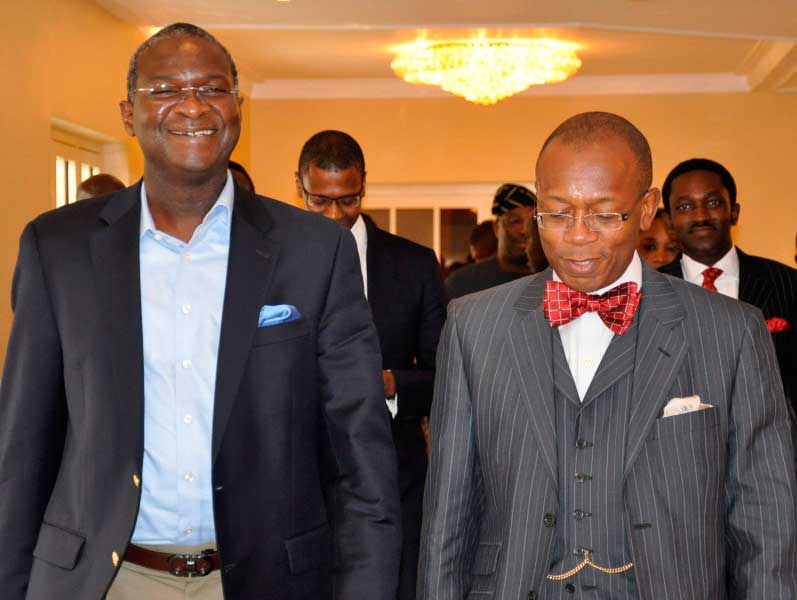 Lagos State Governor, Mr Babatunde Fashola(SAN) on Friday stated that the future of Africans as a people irrespective of their location in the world will depend on what the current regime of laws will do to help promote orderly progression and deal with crises.

Governor Fashola who spoke when he received some lawyers from the Chambers of Olanihun Ajayi LP and foreign guests who are in the country as part of the 50 th anniversary of legal practice of the Chambers of Olanihun Ajayi (LP) at Lagos House, Marina stated that irrespective of whether it is the collapse of the capital markets or banking sector, at the root lies some failure of law.

The Governor explained that it may be in the implementation of regulatory regimes or inadequacy of laws that have failed to keep abreast of the complexities of today’s civilisation.

“We have to determine whether laws made 50 years ago are still relevant to deal with the changing financial climate, whether laws made in the advent of the industrial revolution would be adequate to sustain the human civilisation through what can be described as the technological revolution in a borderless planet.

“How do we develop very quickly the regime of law that will cope with some of that excitement that we are all looking forward to? How do we tax goods and services when they are sold electronically in the totally wireless world?” the Governor asked.

Governor Fashola who commended the initiative of Olanihun Ajayi LP for promoting knowledge, added that Lagos State has also sought to promote a similar initiative through what it christened the Kuramo Conference.

He recalled that the Kuramo Conference was simply to promote debate on a new legal order to regulate the affairs of the human race in business and so many diverse parts.

Governor Fashola who also spoke on the issue of oil and gas wondered why the world sells oil and gas by standard international regulations and standardised pricing but accepts that the cleaning up of oil spills is not regulated by standards.

“Why should weaker nations and communities suffer a less than salutary clean up exercise than what obtains in Europe and the Americas?” Governor Fashola sought to know.

While commending the initiative to commemorate 50 years of law practice with a programme that seeks to promote the exchange of knowledge, the Governor said this is because knowledge and ideas would be the most enduring legacies that civilisation will bequeath to the next generation.

He explained that it is knowledge and ideas that will decide how well the people will live for the period that man is still on earth.

Said he: “It is what has driven the human civilisation from its primordial state to a high technology and information technology and connectivity stage that reduces what used to be far flung places to distances that are now almost within the touch of a button.”

Governor Fashola stated that he decided to meet the visitors to share some of his concerns, some of his dreams about the opportunities that lie ahead in the African continent, adding that the capacity of the human resource on the continent is only limited by the lack of finance.

He stated that finance is actually seating within the continent but that the people are not extracting it by being creative and producing well, adding that a lot of Africa is not connected by transportation.

The Governor stated that he hopes to see a situation where people can get out from Nigeria and drive to Ghana and Cote’ de Ivoire in a matter of hours or travel by motor boats across those countries of the sub-region at least in the first instance that are connected or connectable by water.

The Lagos Sate Governor who also spoke on the project which he accompanied President Goodluck Jonathan to commission in Lagos, said the project speaks of a revitalised Nigerdock that is promoting and providing local capacity for dry dock, ship repair and providing employment for Nigerians.

The Governor stated that the platforms commissioned are well held platforms for totally fabricated and built in Nigeria being the first of its kind that ever happened and was done domestically.

He said this explains why the State has focused knowledge and attention on the expansion of the Lagos- Badagry Expressway which is a 60-kilometre highway which is being expanded from its previous four lanes to 10 lanes.

He emphasised that it will provide a local rail transit in the middle to provide fullest possible transportation options for the Badagry axis because it is the gateway to West Africa.

“61 kilometres from here you will be driving into another African country Republic of Benin, from there to Togo and from there to Ghana and from Ghana to Cote d’Ivoire. But it is an excruciating experience to traverse this four countries which is a journey that is barely 500 kilometres.

“It is an excruciating experience if you manage to do it in 11 hours and it is something that can be done by four hours or five hours of driving. So, we believe that if we complete that project there would be a lot of relief, there would be so many spinoffs,” he added.

The Governor reiterated that the dynamics of the real estate in the corridor alone have changed in the last three years and still changing because people are taking more rapid position as more offers are still being received.

Speaking earlier, the leader of the team, Dr Konyinsola Ajayi (SAN) said the team is made up of people from 11 different countries with a good number of them coming from Africa.

He said it is also instructive to note that it may sometimes be very difficult to get African brothers to come to Lagos as the present team has succeeded in doing, adding that the team members would be taken round Lagos.

Dr Ajayi said beyond the beauty of Lagos, the state is not just large in terms of number but that 60 percent of the nation’s economy resides in Lagos just as all the banks are quartered here.

Also speaking, the State Attorney General and Commissioner for Justice, Mr Ade Ipaiye who welcomed the guests said Olanihun Ajayi has been at the forefront of legal practice in Nigeria and indeed beyond for a number of reasons.

He said the team of experts is part of the activities to mark the 50th anniversary of Olanihun Ajayi LP.

The courtesy visit was attended by members of the State Executive Council including the Commissioner for Finance, Mr Tokunbo Abiru and his Commerce and Industry counterpart, Mrs. Sola Oworu while among those on the team of Dr Koyinsola Ajayi included the Deputy Governor of the Central Bank of Equatorial Guinea.