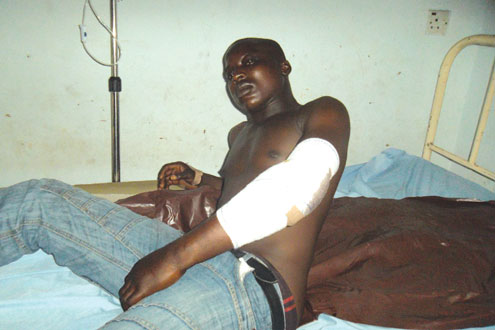 An unidentified police sergeant attached to Area ‘C’ Police Command, Iponri, Surulere, Lagos, allegedly went beserk and shot a truck driver on his left hand and a stray bullet he fired killed another person while he was making efforts to escape from the scene of the incident to avoid being lynched by an angry mob.

An eyewitness told P.M.NEWS that trouble started when the cop with about five others who were operating in a (danfo) commuter bus blocked the truck with a Lagos registration number RV538 EKY driven by Saheed Mufutau. The incident occurred at Jimoh Odutola Street, by PHCN office, Surulere, Lagos on Friday.

According to the source, the policeman, after checking the truck’s particulars and they were up to date, demanded for a N20,000 bribe which the driver pleaded he could not afford because he was in the area to off-load empty containers.

During the ensuing argument, the sergeant allegedly shot the driver in his left hand. Sensing danger, his colleagues in the danfo bus sped off and left the sergeant to his fate.

In his desperate bid to escape from the scene, the cop fired several shots into the air to scare the mob from lynching him. One of the bullets he fired hit Dotun Alawiye, a motor spray painter at a nearby workshop. He died instantly.

The erring sergeant still managed to escape with the help of a motorcyclist he forced to ferry him away from the area.

He was later arrested at Bode Thomas Police Division and handed over to the Area ‘C’ Police Command where he was serving.

Speaking with P.M.NEWS, Chairman of Artisans Association at Doyin bus stop, where the deceased painter had his workshop, Mr. Gbenga Shoneye, said they heard the gun shots at the bus stop but did not know one of them had been hit by a stray bullet.

“We are appealing to the Lagos State Commissioner of Police to ensure that justice is done because the deceased had a wife and four children,” he said.

Wife of the deceased Mrs. Omolara Karounwi, 30, said she was shocked to hear that her husband was killed by a stray bullet because he was an easy-going person who never got involved in any trouble.

“We had been married for 15 years and blessed with four children. How am I going to cope with the upkeep and training of the children?” she wept.

She called on the authorities to ensure that justice is done on the murder of her husband, while also soliciting for the assistance of kind Nigerians on the upkeep of her four children.

Narrating his ordeal to P.M.NEWS on his bed at a hospital on Savage Street, Orile Iganmu, Lagos, the shot driver Saheed Mufutau of 22, Ifelodun Street, Moslem area, Ibadan, Oyo State, said he lives in Ibadan with his wife and a child.

“On the day of the incident, I brought an empty container with my truck from Mile 2 to Eric Moore, and on my way back, a danfo bus suddenly blocked my way on Jimoh Odutola Street and two policemen in uniform and some others in plain clothes dropped off the bus and demanded for my driver’s licence and vehicle particulars. I obliged.

“After they had checked the papers and discovered all were current, one of them with a gun shouted at me that I must give them N20,000 for off-loading my container. As I tried to explain that I had no money on me, one of them removed my vehicle plate numbers and they entered their vehicle and tried to zoom off.

“As I made attempt to retrieve my vehicle plate number from them, the armed cop shot at my left hand and I fell down while they escaped.

“An okada rider rushed me to the hospital, ”Mufutau explained.

He appealed to the Lagos State Governor, Mr. Babatunde Raji Fashola and state Commissioner of Police to come to his aid because the hospital management are yet to operate on his hand to remove the bullet lodged there.

When P.M.NEWS visited the Area ‘C’ Police Command to see the Area Commander and DPO, they were said to have gone to the Lagos State Command for a briefing, but a police source confirmed the incident and said that the errant cops has been arrested.