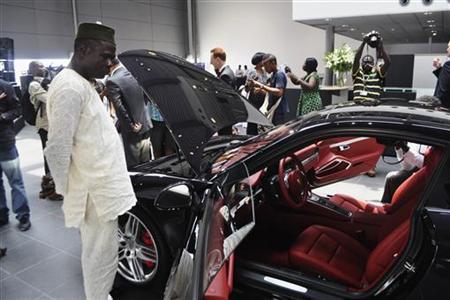 Warning: If you are a poor Nigerian, do not read this story because you gotta cry!

(Reuters) – Nigeria’s super rich are no strangers to conspicuous consumption, and there’s no better way to flaunt your wealth than by buying a brand new European sports car.

German carmaker Porsche officially opened a new car dealership on Friday in the heart of Lagos’ wealthiest district, Victoria Island, a place with one of the world’s highest concentrations of millionaires.

There are already dealerships specialising in Aston Martin and Lamborghini, but Porsche hopes to capitalise on a promise of providing sturdier vehicles that can cope with Nigeria’s rough roads. Its presence is being seen as a vote of confidence in the West African nation’s fast-growing economy.

Porsche also plans to set up an operation in the capital Abuja, where roads are newly built – a better market for the 911 sports model – and where politicians are amongst the world’s most highly paid.

“The African continent, and in particular Nigeria, is of growing importance to us at Porsche,” the company’s Middle East and Africa head George Wills said, unveiling the new 911 model.

Nigeria, Africa’s second biggest economy, grew 7.68 percent in the last quarter of 2011, one of the fastest in the world.

“We’re quite confident the numbers will be strong,” Wills told Reuters in front of the new 911 sports car, after a Porsche official revved its engine for flashing cameras.

“It’s difficult to put a finite number on it, but certainly enough to give a return on this investment,” he added.

Porsche Nigeria general manager Julian Hardy estimates 200 Nigerians own Porsches – the dealership had been running prior to the official launch since July and sold an undisclosed number, and rich Nigerians have been importing them for decades.

At a party to celebrate Porsche’s launch, Nigerians in sharp suits and cocktail dresses drank martinis and danced around the 911 display model to live music.

“You can drive around Lagos … then take your car to the race track and become a beast and go wild,” said Emmanuel Ngala, an IT consultant who owns a Cayenne 4×4 and is buying a 911.

The oil wealth of Africa’s biggest producer has made multi-millionaires of its elite in the past few decades, even while absolute poverty has increased to 60 percent of the population.

Lagos embraces some of Africa’s most expensive real estate alongside some of its most crowded slums. On one street, a Hummer drives past a tramp sifting through a dustbin.

The car park at the Porsche show rooms has several models.

“It’s a nice car,” said employee Mohammed Ibrahim, as he hosed down a chrome coloured Cayenne and shined it to a sparkle with a cloth. On his 20,000 naira a month salary it would take him 125 years to afford one if he didn’t buy anything else.

“God might give me a car like this one day. He can do that, if he wants to. He can do anything,” he said, grinning.

Sandwiched between the lagoon that led Portuguese sailors to name this city ‘Lagos’ and the Atlantic, Victoria Island is a place of fund managers in fine woollen suits and oil oligarchs.

But it has scant electricity, most roads are sandy, potholed and patrolled by beggars in rags. Poor drainage means they flood – in the rainy season, fishermen sometimes traverse them by canoe, raising doubts about the practicality of sports cars like a 911.

Other luxury brands have however made it big in Nigeria. It is a significant African market for LVMH. Most bars can get you Moet & Chandon champagne or Hennessy brandy, which women sip next to their Louis Vuitton handbags.

The “Auto Lounge” in Victoria Island lets you enjoy an expensive drink overlooking a garage of Aston Martins.