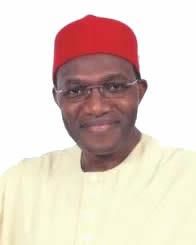 The PDP candidate described the election an uneasy battle for him.

“This is because I did not contest against Nzeribe but against the state governor, who carried the campaign along with his wife, commissioners and other government apparatus.”

He maintained that the accord he had with his supporters as regards the development of his constituency would be pursued with vigour.

“We will renew that accord as my supporters have given me their total support and commitment.”

The politician expressed gratitude to God “for helping me to come out of the difficult battle victorious.”

It would be recalled that the APGA candidate had challenged the victory of Uba in the April 2011 election at the election petitions tribunal which sat in Awka on the grounds that the election that produced his opponent was fraught with irregularities.

The petition was, however, dismissed by the tribunal for his inability to substantiate the allegations of malpractice against Uba and INEC during the poll.

Nzeribe thereafter took his case to the Court of Appeal, Enugu, which nullified the election and ordered a re-run poll in the zone.