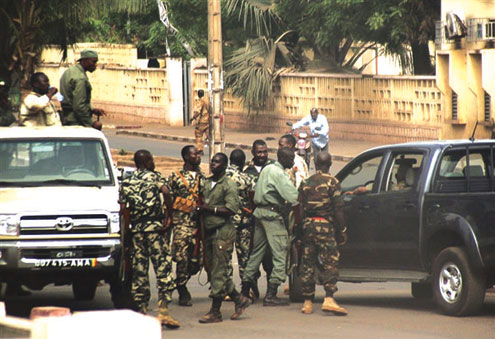 •Mali soldiers gather on a Bamako street Wednesday. Scores of Malian soldiers were displeased with the administration of the outsted regime.

Rebel soldiers announced early today that they have seized control of Mali after a palace attack, the Associated Press reported.

The whereabouts of the President, Amadou Toumani Toure, were unknown at press time.

The soldiers, in a brief statement read on national television, said they seized power in protest at the government’s failure to quell a nomad-led rebellion in the north of the country that have claimed many lives and left hundreds of thousands homeless in recent months. The coup has been fronted by soldiers of the rank of captain or lower, Reuters said.

It was learnt that the army has for weeks appealed to the government for better weapons to fight the northern Tuareg rebels, now bolstered by heavily-armed ethnic allies who fought on Gaddafi’s side last year but have returned to Mali.

On national television, a group of around 20 soldiers in military fatigues were shown crowding around a desk, facing the camera. They announced that the country is under the control of the military’s National Committee for the Reestablishment of Democracy and the Restoration of the State, or CNRDR. They said they were suspending Mali’s constitution and dissolving its institutions, AP said.

“The CNRDR representing all the elements of the armed forces, defensive forces and security forces has decided to assume its responsibilities and end the incompetent and disavowed regime of Amadou Toumani Toure,” they said, reading from a statement.

“The objective of the CNRDR does not in any way aim to confiscate power, and we solemnly swear to return power to a democratically elected president as soon as national unity and territorial integrity are established.”

The coup is a major setback for one of the region’s few established democracies. It came one month before Mali’s presidential election. Toure, 63, was due to step down after those elections.

Gunfire could be heard from the direction of the presidential palace early today, the Associated Press reported. A soldier at the palace said that the president’s bodyguards had failed to fight the renegade soldiers, who forced their way in. They searched the grounds but could not find Toure, whose whereabouts are unknown, AP said.

The events that culminated in the coup began yesterday morning at a military camp in the capital, where Defence Minister Gen. Sadio Gassama came for an official visit. In his speech to the troops, the minister failed to address the grievances of the rank-and-file soldiers. The rebellion has claimed the lives of numerous soldiers, and those sent to fight say they are not given sufficient supplies, including arms or food.

Recruits started firing into the air yesterday morning. By afternoon, troops had surrounded the state television station in central Bamako, located in southwest Mali, yanking both the television and radio signals off the air for the rest of the day. By yesterday evening, troops had started rioting at a military garrison located in the northern town of Gao, some 2,000 miles (3,200 kilometers) away.

A freelance journalist from Sweden who was driving to her hotel near the TV station around 4 p.m. yesterday said that trucks full of soldiers had surrounded the state broadcaster, AP reported.

“They came and started setting up checkpoints. There were military in the streets, stopping people,” said Katarina Hoije. “When we reached our hotel which is just in front of the TV station, there were lots of military outside, and more cars kept arriving – pickup trucks with soldiers on them.”

President Touré had promised to step down in advance of elections set for April 29. The Malian leader is a former soldier who overthrew the then president-for-life, Moussa Traore, in 1991 before handing power back to civilians. He came to office in elections in 2002 and was returned to office in 2007, the New York Times reported.

Meanwhile, the West Africa regional bloc ECOWAS has condemned actions by renegade Mali soldiers who claimed they had seized power from an “incompetent regime.

“ECOWAS strongly condemns the misguided actions of the mutineers and warns that it will not condone any recourse to violence as a means of seeking redress,” said a statement by the Economic Community of West African States bloc.

What began as a mutiny over the government’s response to the rekindled Tuareg insurrection in the north on Wednesday afternoon turned into a full-blown coup as soldiers seized control of the presidential palace and the government broadcaster.

Putschists, calling themselves the National Committee for the Establishment of Democracy, went on television early Thursday to announce they had taken over power in the west African country.

ECOWAS said it had followed with “dismay and mounting concern” events in Bamako, the capital of its member state Mali.

It said the action by the military was “all the more reprehensible” coming amid regional and international peace efforts to end the Tuareg-led rebellion in the north of the country.

The European Union also called Thursday for constitutional rule to return to Mali “as soon as possible” after mutinous soldiers claimed to have seized power in a coup.

“We condemn the military takeover of power and the suspension of the constitution. Constitutional rule should be restored as soon as possible,” said Michael Mann, spokesman for EU foreign policy chief Catherine Ashton.

“The safety and liberty of the people of Mali must be preserved in all circumstances,” he said in a statement.

Renegade soldiers claimed Thursday they had seized power from an “incompetent regime,” announcing on television they had suspended the constitution and dissolved state institutions.

The putschists, calling themselves the National Committee for the Establishment of Democracy, said they had acted due to government’s “inability” to handle a Tuareg-led insurrection in the north of the country.

The group’s spokesman, identified on-screen as Lieutenant Amadou Konare said the takeover was a result of a “lack of adequate material to defend the nation” as well as government’s inability to combat terrorism.

Claiming to represent the nation’s defence forces, Konare said the junta “solemnly commits to restore power to a democratically-elected president as soon as national unity and territorial integrity are re-established.”

Mali was to hold the first round of a presidential election on April 29.

In Washington, U.S. State Department spokeswoman Victoria Nuland said: “The situation is currently unclear and unfolding quickly … There are reports of military forces surrounding the presidential palace and movement of vehicles between the palace and the military barracks.”

U.N. Secretary-General Ban Ki-moon called for calm and for grievances to be settled democratically in a statement hours before the soldiers said they had seized power.

The commission of the African Union said it was “deeply concerned by the reprehensible acts currently being perpetrated by some elements of the Malian army”.

France called for elections “as soon as possible” in its former colony of Mali early today after mutinous troops were reported to have overturned the government, chased the president from his hilltop palace, imposed a curfew and suspended the constitution, the New York Times reported.

The French foreign minister, Alain Juppé, told Europe 1 radio that France condemns the mutineers’ actions and “demands the re-establishment of constitutional order, and elections, which were scheduled for April, must take place as soon as possible.”

Algeria voiced deep concern Thursday over the military coup in neighbouring Mali and firmly condemned the seizure of power by a group of renegade soldiers.