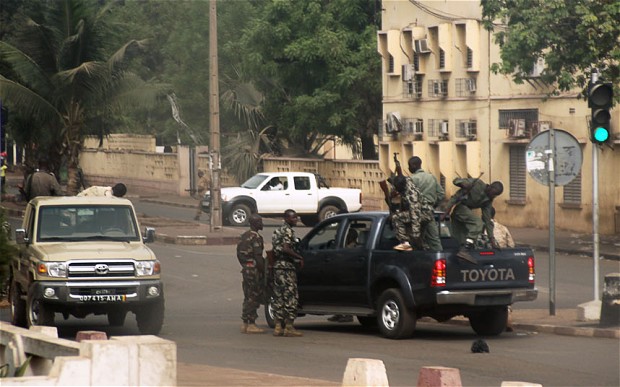 Renegade Mali soldiers on Thursday claimed they had seized power from an “incompetent regime,” announcing on television they had suspended the constitution and dissolved state institutions.

The putschists, calling themselves the National Committee for the Establishment of Democracy, said they had acted due to government’s “inability” to handle a Tuareg-led insurrection in the north of the country.

A group of a few dozen soldiers appeared on state television at about 0445 GMT after a few false starts battling to get audio equipment working and hours of music videos playing after seizing the broadcaster in Bamako.

The group’s spokesman, identified on-screen as Lieutenant Amadou Konare said the takeover was a result of a “lack of adequate material to defend the nation” as well as government’s inability to combat terrorism.

Claiming to represent the nation’s defence forces, Konare said the junta “solemnly commits to restore power to a democratically-elected president as soon as national unity and territorial integrity are re-established.”

The leader of the junta was revealed to be one Captain Amadou Sanogo, who appeared briefly to announce the imposition of a national curfew, without specifying the time.

“We are in control of the presidential palace,” one of the rebels told AFP on condition of anonymity.

Meanwhile an independent source said President Amadou Toumani Toure, earlier holed up in the palace as shots were traded outside, had managed to leave the premises.

What began as a mutiny over the government’s response to the rekindled Tuareg rebellion in the north on Wednesday afternoon turned into a full-blown coup as soldiers seized control of the government broadcaster and attacked the presidential palace.

Witnesses reported heavy gunfire and the use of tracer bullets, while one noted flames coming from the southern side of the presidential palace, perched on a hill overlooking Bamako.

Calls for calm poured in from abroad as the United Nations, France and United States expressed alarm at the events unfolding in the landlocked west African nation.

Elite paratroopers known as the “Red Berets” had attempted to defend the presidency, but the renegade soldiers claimed the upper hand.

The coup comes just a month before Toure was due to step down ahead of April elections after serving two presidential terms. He was not a candidate.

The president is himself a former soldier who led the ouster of president-for-life Moussa Traore in 1991 before handing power to civilians. He later won an election in 2002 and was re-elected in 2007.

Under his leadership Mali — which has battled successive Tuareg rebellions since independence and more recently Al-Qaeda in the Islamic Maghreb (AQIM) activities — has since been hailed as a growing democratic success in the region.

The Tuareg, many of whom fled drought and discontent under a southern government to work and fight for Moamer Kadhafi in Libya, returned heavily armed and battle-experienced after that country’s conflict last year.

In mid-January they launched a fresh rebellion for independence of what they call Azawad, their stomping ground which makes up the vast desert northern triangle of the bow-tie shaped nation.

Anger has grown in recent weeks over the government’s handling of the conflict in which the Tuareg attacks have caused up to 200,000 people to flee.

While no official death toll is available, many soldiers are believed to have died in the fighting or taken prisoner.

Wednesday’s turmoil erupted when efforts by Defence Minister Sadio Gassama to ease tensions at a military barracks outside the capital turned sour and soldiers fired shots into the air as they demanded proper weapons with which to face the rebels.

“We want ammunition to go and fight the Tuareg rebels. Enough is enough,” a corporal at the Kati camp told AFP.

Soldiers took to the capital, firing shots wildly into the air and sending people running in all directions as panic grew.

There were immediate international calls for a peaceful resolution to the crisis.

“We believe that grievances should be addressed through dialogue, not through violence,” State Department spokeswoman Victoria Nuland said, urging US citizens to stay indoors. The UN Security Council also appealed for calm.

“Members of the council expressed concern about the reports of military disturbances in Mali. They appealed for calm from all stakeholders and respect for the constitutional order,” said Britain’s UN ambassador Mark Lyall Grant, the council president for March.

Anger has been simmering in Mali over the government’s stance and in February violent protests broke out as the wives and families of those fighting the rebels took to the streets.

Ill-equipped against the heavily armed Tuareg, in some cases soldiers abandoned their barracks in smaller towns as they withdrew to defend larger targets in the vast, desert zone.

A nomadic community of some 1.5 million people, Tuareg of various tribes are scattered between Algeria, Burkina Faso, Libya, Niger and Mali.

Mali and Niger experienced uprisings as the Tuareg fought for recognition of their identity and an independent state in the 1960s, 1990s and early 2000, with a resurgence between 2006 and 2009.