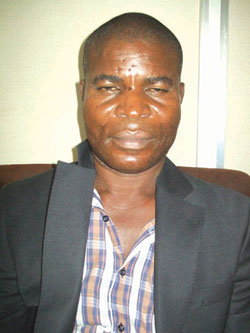 Operatives of the National Drug Law Enforcement Agency, NDLEA, have apprehended a suspected drug trafficker with two international passports, one concealed in his pants, the agency said in a statement this morning.

NDLEA said that the suspect, Ogbobe Chukwuma Franklin, 43, tested positive for drug ingestion during the screening of passengers at the Murtalla Muhammed International Airport, MMIA, in Lagos, southwest Nigeria.

“He held a set of travel documents while the other set was concealed in his pants,” Mitchell Ofoyeju, NDLEA Head of Public Affairs, said, adding that the suspect was apprehended on 17 March while on his way to Malaysia.

According to Mr Hamza Umar, the NDLEA Commander at MMIA, luck ran out on the suspect when officers detected another travel document in his pants.

“Ogbobe Chukwuma Franklin was arrested following the detection of another set of travel documents on him. This was discovered during a frisk at the screening point. He had an ECOWAS Travel Certificate with Asky airline to Lome, Togo, while his international passport with an Emirate ticket to Malaysia,” Ofoyeju quoted Umar as saying.

NDLEA said that preliminary investigation revealed that the suspected intended to be screened as a Togo-bound passenger only to board an Emirate flight to Kaula Lumpur International Airport, Malaysia.

“While under observation, he excreted 58 wraps of substances that tested positive to methamphetamine weighing 1.200kg. The suspect was found to have invested about 8,000 dollars in the alleged drug crime in expectation of over 300 percent profit. He had previously visited India, Brazil and Bangladesh,” NDLEA said.

The agency said that the suspect is married with two children and has a boutique at Okokomaiko area of Lagos. He attributed his involvement in drug trafficking to financial hardship, NDLEA said, adding that he will soon be charged to court.

Ofoyeju quoted the Chairman and Chief Executive of the NDLEA, Ahmadu Giade, as saying that a background check on the suspect points to the fact that he is a professional drug trafficker.

“The Agency is investigating the suspicion of sponsorship of the illicit drug transaction. He has also given some tips that we are exploring in our further investigation. NDLEA is determined to foil the plans of drug trafficking syndicates,” Giade said.