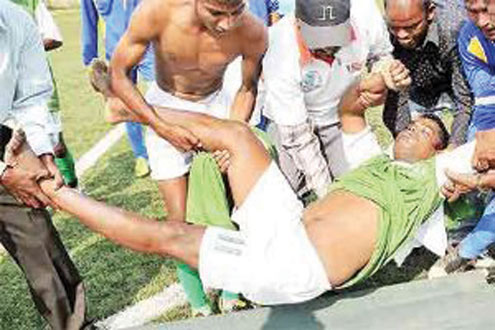 •Late Venkatesh being carried away after collapsing on the pitch yesterday.

The first class pitchside treatment received by Fabrice Muamba was thrown into sharp relief yesterday by the death of a footballer who collapsed while playing in India.

In a shocking incident that again brought to light the poor medical facilities provided for local football tournaments, a 27-year-old player died on Wednesday after he collapsed at the Bangalore Football Stadium during a league match.

Times of India reports that Venkatesh, a midfielder for A-division side Bangalore Mars, came in as substitute in the 73rd minute before collapsing in the dying minutes of the match. The Bangalore District Football Association, which annually organises the Super, ‘A’, ‘B’ and ‘C’ divisions, allegedly did not have a doctor present on the field. A physio and players rushed in and tried standard medical procedures on Venkatesh, who by now was having fits, teammate Janardhan said.

Then came the crunch – no ambulance. Though some BDFA members denied the allegation, team manager Shiva, who is also a BDFA member, said there was a tempo on standby at the eastern wing of the stadium. “The only reason we couldn’t get it out in time was that there were many two wheelers parked around it,” he said.

Players and officials carried Venkatesh in their arms off the field, hired an auto rickshaw and rushed him to Hosmat Hospital, where he was declared dead. “There was no pulse or respiration. We gave him CPR and defibrillator shocks, but it was too late,” Hosmat vice-president Dr Ajith Benedict Royan said.

Preliminary post-mortem reports agreed with Dr Royan’s suggestion that Venkatesh died of cardiac arrest. “There were no external injuries. This is also known as Sudden Death Syndrome, which is common among footballers. Maybe if he had been given oxygen or proper medical care at the time of the incident, he could have stood a chance,” Dr Royan added.

Venkatesh has represented Karnataka at the junior and sub-junior levels and has been with Mars for the last five years.