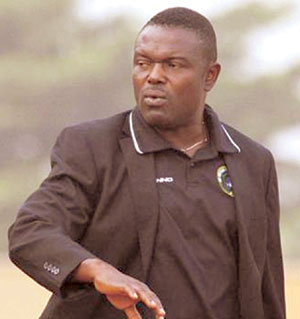 Chief Coach of Dolphins, Stanley Eguma, has blamed bad officiating which resulted to his team 0-1 defeat against Enyimba FC in the Nigeria Premier League played on Wednesday at the Aba Township Stadium,Aba, Abia State.

Eguma said the centre refree was biased in his officiating which gave the home team undeserved victory over his team.

“Our defeat came as a result of bad officiating.The authority still have a lot of work to do if they want our league to compete with other leagues in Africa.We could not do better when officiating was biased,” he said.

Dolphin played the second half two men short after Abduljaleel Ajagun and Adaji Hussein were sent off in the first period.

Dolphin media Officer China Acheru said the referee was not fair, considering the number of cards awarded against his team which were not deserved.

“I can’t say the referee aided them to beat us but he was too harsh with his decisions. Two of our strikers, Abdul Ajagun and Adaji Hussein, were red carded in the first half and we got five yellow cards in the same first half. He awarded a penalty which Gbolahan Salami missed in 66th minute,” China reported.