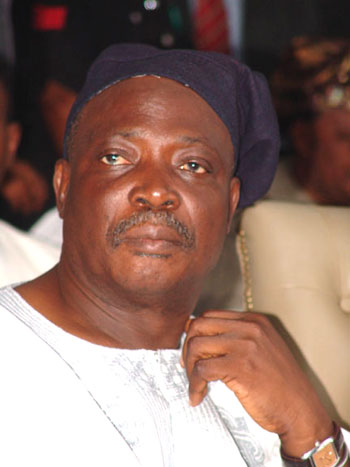 The ding-dong affair between the former Governor of Oyo State, Senator Rasheed Ladoja, and his party, the Accord Party (AP) has taken a new dimension.

In a statement signed by the party’s National Secretary, Dr. Samson Isibor and made a vailable to P.M.NEWS, the former governor was promised a hell of a time for what was tagged his anti-party stance.

Reacting to Senator Ladoja’s denial of his expulsion from the AP earlier this week, Dr. Isibor, asserted that he ex-governor’s “cup is full”.

He further stressed that “to confirm the party’s seriousness, in a couple of days, the party will constitute a panel to investigate the activities of the Oyo State chapter of the Accord Party, particularly the role the current state executive committee of the party is playing in the sell-out by Senator Rasheed Ladoja.”

In the earlier statement, the AP had accused Senator Ladoja of “trading with our great party”, adding that after much deliberations on his activities and his penchant to disregard the constituted authority of the party, the National Executive Council of the party took the decision to expel him while warning its members including those in the state and National Assemblies to steer clear of anti-party activities or face appropriate sanctions.

But in his reaction, Senator Ladoja has denied that the party expelled him while urging “the media to ignore it as a rumour and antics of authors of mischief.”