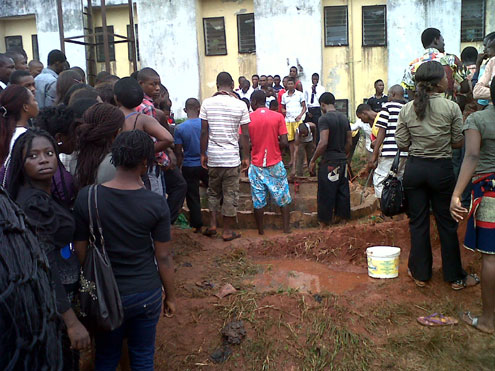 The well that took the lives of the two students.

Thousands of students of Ambrose Alli University (AAU), Ekpoma, took to the streets of the town, Monday, mourning the death of two female students simply identified as Jennifer and Abigail.

The two students lost their lives Friday after falling into a collapsed well from which they were fetching water, leaving seven others seriously injured.

The students, dressed in mourning clothes, marched through major streets of Ekpoma and neighbouring communities chanting dirges in the names of their departed colleagues.

The well is located in the premises of Kudirat Hostel within the university campus.

They blamed the death of the two students on the insensitivity of government who they said had failed to provide basic amenities for the institution despite the sharp increase in their school fees.

He said this during an unscheduled visit to the accident ward of the Irrua Specialist Hospital, Irrua at the weekend.

Airhiavbere sympathised with family of the dead students and other victims of the disaster who are presently on admission.

Touched by the pathetic condition of the victims, Airhiavbere made a cash donation of N100, 000 to one of the victims, Miss Faith Adoghe, a 200 level student of Theatre & Media Arts of who was still in a very critical state at the time of visit to offset her hospital bills.

Other patients in the hospital ward, including a 70-year-old woman, also benefited from the monetary assistance by Airhiavbere who made a separate donation of N200, 000 to assist in offsetting their hospital bills.